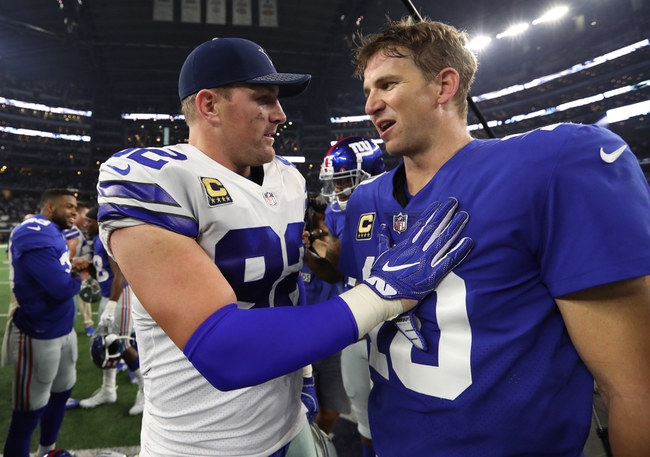 The Dallas Cowboys need a big road victory here to get a game above a .500 record. The Dallas Cowboys have won three of their last four road games. Dak Prescott is completing 62.9 percent of his passes for 2,420 yards, 18 touchdowns and nine interceptions. Prescott has zero touchdown passes in four of his last six games. Dez Byrant and Terrance Williams have combined for 1,105 receiving yards and five touchdowns while Jason Witten has 51 receptions. The Dallas Cowboys ground game is averaging 138.8 yards per contest, and Ezekiel Elliott leads the way with 783 yards and seven touchdowns. Defensively, Dallas is allowing 23.7 points and 342.6 yards per game. Jaylon Smith leads the Dallas Cowboys with 71 tackles, DeMarcus Lawrence has 13.5 sacks and Jeff Heath has two interceptions.

The New York Giants look to play spoiler to a rival while winning gather second home game of the season. The New York Giants have lost four of their last five home games. Eli Manning is completing 62.5 percent of his passes for 2,411 yards, 14 touchdowns and seven interceptions. Manning has one or less touchdown passes in four of his last six games. Evan Engram and Sterling Shepard have combined for 1,100 receiving yards and seven touchdowns while Odell Beckham Jr. has 25 receptions. The New York Giants ground game is averaging 89.1 yards per contest, and Orleans Darkwa leads the way with 551 yards and three touchdowns. Defensively, New York is allowing 24.3 points and 390.8 yards per game. Landon Collins leads the New York Giants with 95 tackles, Jason Pierre-Paul has 6.5 sacks and Janoris Jenkins has three interceptions.

This line is all over the place, as I guess shops are still adjusting to the news of Eli being named the starting quarterback along with the firing of head coach Bob Mcadoo. Either way, I'll lay anything under a touchdown with the Dallas Cowboys. Eli or no Eli, the Giants still don't have enough healthy bodies to scare anyone. The Dallas Cowboys are coming off a mini bye week and played a very complete game against the Washington Redskins in which the offensive line showed up and the defense forced four turnovers while allowing 56 rushing yards. There's also the obvious must-win factor here, as Dallas needs to win out to have any chance of getting into the playoffs. The Giants are just trying to find a new coach and get things back on track for 2018. There will be motivation with Eli back leading the charge, but the Cowboys should win this by a touchdown regardless.