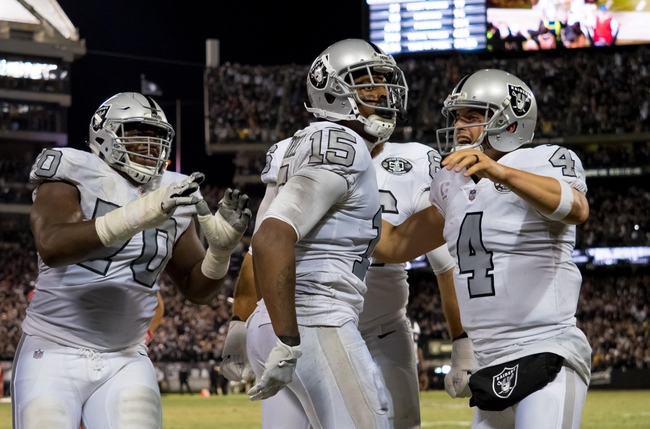 We have a crucial AFC West showdown on tap, as the Oakland Raiders battle the Kansas City Chiefs in week 14 NFL action from Arrowhead Stadium.

The Oakland Raiders come into this one in a 3-way tie for the division lead at 6-6 after winning back-to-back games, including a 24-17 win over the New York Giants in their last outing. Derek Carr threw for 287 yards and a touchdown on 22 of 36 passing, while Marshawn Lynch led Oakland on the ground with 101 yards and a touchdown in addition to another rushing score from DeAndre Washington. Cordarrelle Patterson led Oakland with 4 catches for a team-high 97 yards, while Clive Walford added 4 catches for 57 yards and Seth Roberts chipped in a team-high 5 grabs for 46 yards. Johnny Holton added Oakland’s lone receiving touchdown in the win. Defensively, the Raiders combined for 3 sacks and a pair of forced fumbles, both of which were recovered, while holding the Giants to 265 yards of total offense in the Raider victory.

The Kansas City Chiefs are also in the mix at 6-6, but have fallen mightily to that point, dropping 6 of their last 7 games following a 38-31 loss to the New York Jets last time out. Alex Smith threw for 366 yards and 4 touchdowns on 19 of 33 passing, while also taking his lone carry 70 yards to lead the team in rushing. Kareem Hunt added 40 rushing yards, while Tyreek Hill led the Chiefs with 6 catches for 185 yards and 2 touchdowns and Travis Kelce added the other 2 TDs with 4 catches for 94 yards. It was all efense for the Chiefs, as there was no D to be found whatsoever as the Chiefs surrendered 488 yards of total offense, 30 first downs and a 13 for 20 mark on 3rd down to the Jets in the loss, allowing New York to hold onto the ball for just under a whopping 43 minutes.

I know the Chiefs have been solid ATS within the division over the last year and a bit, but would you lay points with the Chiefs after how they’ve looked over the last couple of months? I didn’t think so. The Raiders aren’t pretty, but they’re getting the job done and all of a sudden the division is up for grabs. I think the Raiders at the very least can keep this one close, if not win it outright considering they’ve had the bulk of the success ATS when these two meet at Arrowhead. Give me Oakland and the points.