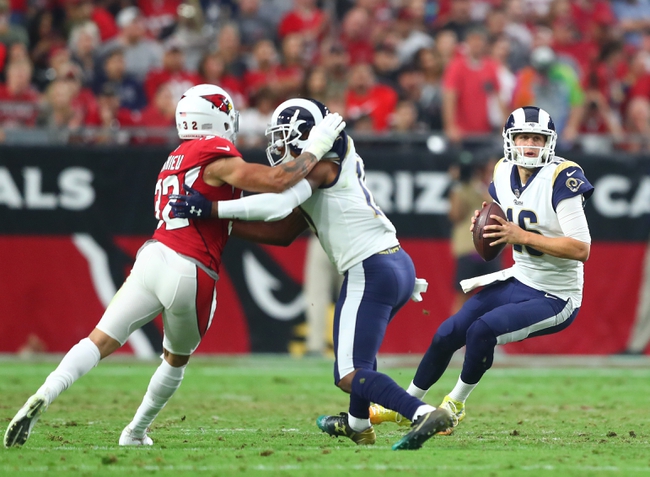 One of the marquee matchups in week 14 pits the Philadelphia Eagles against the Los Angeles Rams on Sunday afternoon.

The Philadelphia Eagles will look to bounce back after having their 9 game winning streak snapped thanks to a 24-10 loss to the Seattle Seahawks in their last outing. Carson Wentz threw for 348 yards, a touchdown and an interception on 29 of 45 passing, while Jay Ajayi led the Eagles’ ground attack with 9 carries for 35 yards. Nelson Agholor led Philly’s receiving corps with 7 catches for 141 yards and a touchdown, while Alshon Jeffery and Trey Burton each had 4 catches for 61 and 42 yards respectively. On defense, the Eagles combined for a pair of sacks while holding Seattle to just 310 yards of total offense, but couldn’t get the stops they needed down the stretch to end up with the L.

The Los Angeles Rams will try to add to their 9-3 mark this season after posting a 32-16 win over the Arizona Cardinals last time out. Jared Goff threw for 220 yards, 2 touchdowns and an interception on 21 of 31 passing, while Todd Gurley II rushed for 74 yards on 19 carries. Gurley II also led the Rams in receiving, catching 6 passes out of the backfield for 84 yards, while Cooper Kupp added 5 catches for 68 yards in addition to a receiving touchdown from Sammy Watkins and Gerald Everett. The Rams got after Arizona on defense, combining for a whopping 7 sacks and a pair of interceptions, including a 41-yard pick-six from Alec Ogletree while the Rams held Arizona to just 305 yards of total offense in the win.

I believe I had Seattle taking down the Eagles last week and now I’m doing the unthinkable and going against Philly again. Sure, the Eagles have been one of the best teams ATS since the start of their win streak, but let’s not act like the Rams haven’t been doing just as well. The Rams are slowly emerging as a dark horse out of the NFC, and this could be the game where people finally take the Rams seriously as a contender. I think the Eagles will find themselves in unfamiliar territory this season, on their first losing streak as the Rams cover here, winning by at least a field goal.