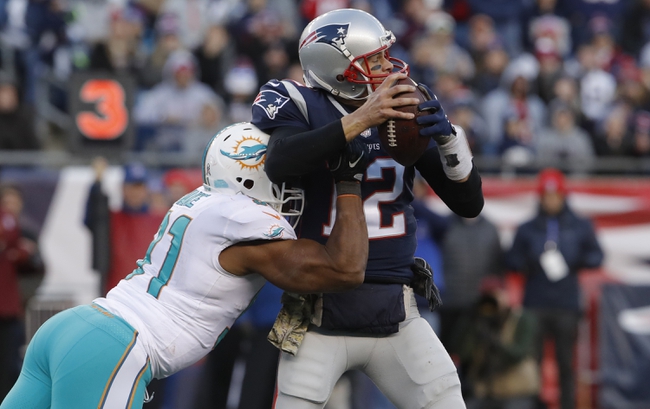 Down at Hard Rock Stadium on “Monday Night Football,” the NFL’s New England Patriots will be visiting the Miami Dolphins in an AFC East battle.

New England is currently 10-2 on the year with an eight-game win streak. Since the bye, the Pats have beaten the Broncos, Raiders, Dolphins and Bills. In that Buffalo game, Patriots QB Tom Brady put up 258 yards with one INT.

Brady has 3632 yards so far this season for New England, with 26 touchdowns and four picks. The Patriots’ top rusher is Dion Lewis, with 590 yards and three scores, and Brandin Cooks leads the receivers on 886 yards and five touchdowns.

Over on the Dolphins’ side, they’re sitting at 5-7 this season. Miami had a five-game losing streak going but won their last outing versus the Broncos. In that one, Dolphins QB Jay Cutler put up 235 yards, two touchdowns and two picks.

This year, Cutler has 1837 yards with 15 touchdowns and 11 INTs, and Kenyan Drake is tops in rushing with 320 yards and two scores for the Dolphins. Miami’s leading receiver is Kenny Stills with 733 yards and six TDs from 48 catches.

Can anyone stop the Patriots? It’s not looking likely, as the last time New England won by less than seven points was way back in early October. When these two teams met in Foxboro a couple of weeks back, the Patriots came up with a 35-17 win. Miami might get a little closer here but the line isn’t thick enough to push me off New England.