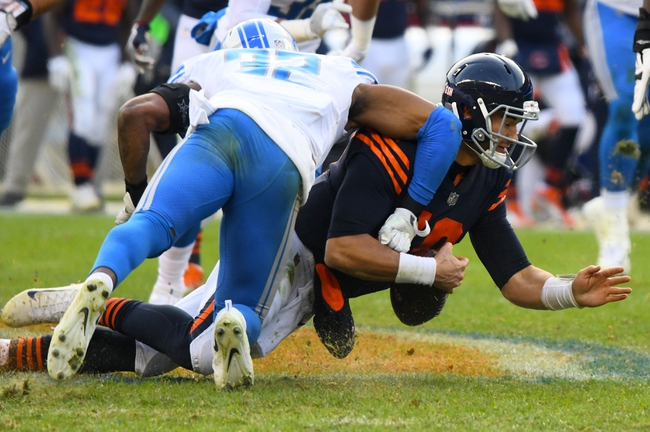 The Chicago Bears look to play spoiler after losing five of their last six games. The Chicago Bears have lost four of their last six road games. Mitchell Trubisky is completing 58.2 percent of his passes for 1,508 yards, six touchdowns and four interceptions. Trubisky has one or less touchdown passes in all nine games during his career. Kendall Wright and Tarik Cohen have combined for 788 receiving yards and two touchdowns while Zach Miller has 20 receptions. The Chicago Bears ground game is averaging 124.5 yards per contest, and Jordan Howard leads the way with 1,032 yards and seven touchdowns. Defensively, Chicago is allowing 21.1 points and 325.5 yards per game. Christian Jones leads the Chicago Bears with 84 tackles, Akiem Hicks has seven sacks and Eddie Jackson has two interceptions.

The Detroit Lions need a win here after splitting their last 12 games to remain in the NFC playoff conversation. The Detroit Lions have lost four of their last five home games. Matthew Stafford is completing 65.6 percent of his passes for 3,683 yards, 23 touchdowns and nine interceptions. Stafford has two or more touchdown passes in four of his last eight games. Marvin Jones Jr. and Golden Tate have combined for 1,737 receiving yards and 12 touchdowns while Eric Ebron has 42 receptions. The Detroit Lions ground game is averaging 76.3 yards per contest, and Ameer Abdullah leads the way with 505 yards and three touchdowns. Defensively, Detroit is allowing 25.3 points and 363.3 yards per game. Tahir Whitehead leads the Detroit Lions with 86 tackles, Anthony Zettel has 6.5 sacks and Darius Slay has five interceptions.

The Detroit Lions seem to either win by the skin or their teeth or lose outright, so I'm not sure how confident I am in laying five points. However, the Lions have beaten the Bears in eight of the last nine meetings and are still fighting for a playoff spot in the tough NFC. The Chicago Bears find ways to lose nearly every week and haven't had much success ATS on the road. Sometimes you have to bite the bullet and lay spreads you really don't want to lay. I'll take the Lions by a touchdown.