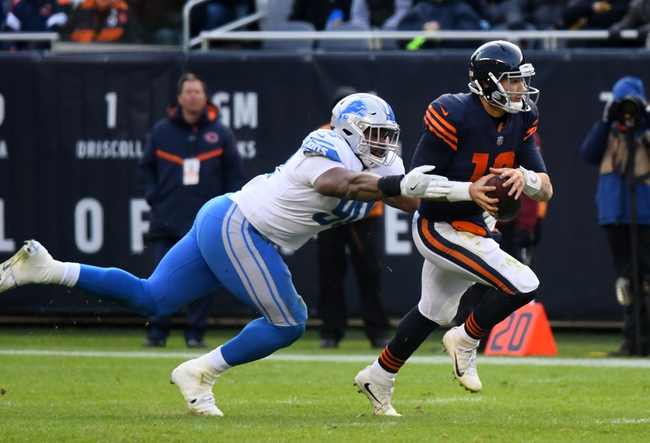 We’ve got Saturday NFL action coming our way from Ford Field as the Chicago Bears take on the Detroit Lions in an NFC North battle.

The Bears enter this game with a 4-9 record overall. Chicago had a five-game losing streak going but won their last outing versus the Bengals. In that Cincinnati game, Chicago’s Jordan Howard bagged 147 yards and two scores off 23 carries.

On the season, Bears QB Mitch Trubisky has 1508 yards with six TDs and four INTs, and Howard is the top rusher with 1032 yards and seven scores. Leading the receiving corps for the Bears this year is Kendall Wright, with 477 yards and one TD from 43 grabs.

Over on the Lions side, they’re sitting at 7-6 on the season. Detroit had lost two to Minnesota and Baltimore, but bagged a win over Tampa Bay on Sunday. In that one, Detroit QB Matthew Stafford threw for 381 yards, one TD and two picks.

Stafford currently holds 3683 yards, 23 TDs and nine INTs on the season, and Ameer Abdullah is the top Lions rusher with 505 yards and three scores. Marvin Jones is the lead Detroit receiver on 885 yards and eight TDs from 51 receptions.

Meanwhile, the Lions are 3-0-1 ATS versus a team with a losing record and 2-5 ATS in their last seven Saturday games. Detroit is also 7-19-1 ATS in the last 27 games in December and 1-4 ATS in the last five home games.

Chicago’s five-game losing streak was pretty bad, but to their credit they lost by more than one score just once in that span. The Bears got the benefit of a Cincinnati team hungover from the Steelers game the week before this past Sunday, but the Chicago defense stepped up well. I would like the line to be a little thicker, but I still think the Bears can eke in there and cover.