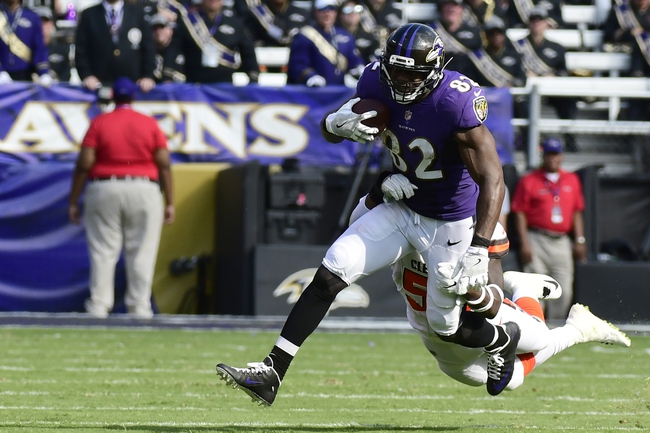 We have an AFC North division tilt on tap as the Baltimore Ravens take on the Cleveland Browns in week 15 NFL action.

The Baltimore Ravens will look for another win to keep their wild-card hopes alive after falling to 7-6 after letting one slip away in a 39-38 loss to the Steelers in week 14’s edition of Sunday Night Football. Joe Flacco threw for 269 yards, 2 touchdowns and an interception on 20 of 35 passing, while Alex Collins rushed for a team-high 120 yards and a touchdown on 18 carries. Javorius Allen added 25 rushing yards while also chipping in a pair of rushing TDs, while Mike Wallace led the Ravens with 3 catches for 72 yards. Chris Moore added 3 catches of his own for 48 yards and a touchdown, while Danny Woodhead logged a team-high 4 catches and Patrick Ricard added a touchdown catch of his own in the loss. On defense, the Ravens combined for 3 sacks and a forced fumble but couldn’t get the job done as they allowed Pittsburgh QB Ben Roethlisberger to throw for over 500 yards while giving up almost 550 yards of total offense in the losing effort.

The Cleveland Browns are just playing out the string, trying to find their first win after dropping a heartbreaker by a final score of 27-21 in overtime to the Green Bay Packers to fall to 0-13 this season. DeShone Kizer threw for 214 yards, 3 touchdowns and a pair of interceptions on 20 of 28 passing, while Isaiah Crowell led the team with 19 carries for 121 rushing yards. Josh Gordon led the Browns with 69 receiving yards and a touchdown on 3 catches, while Corey Coleman added a team-high 5 catches for 62 yards and a touchdown. Duke Johnson Jr. added 4 catches for 41 yards and a receiving score of his own in the loss. On defense, a Nate Orchard sack was the lone individual highlight as the Browns allowed 341 yards of total offense and over 36 minutes of possession including the extra frame.

I said it last week and the same applies here, the Browns are looking like they’re going to be that team that finishes the year 0-16. Anything can happen on any given week, but the numbers don’t lie. I mean look at the respective records ATS when it comes to playing within the division. The Ravens have been pretty much money, while the Browns have been a pile of steaming garbage. Not to mention, the Ravens have had Cleveland’s number ATS in this matchup, so I think there’s no other choice here but to lay the points with the Ravens.