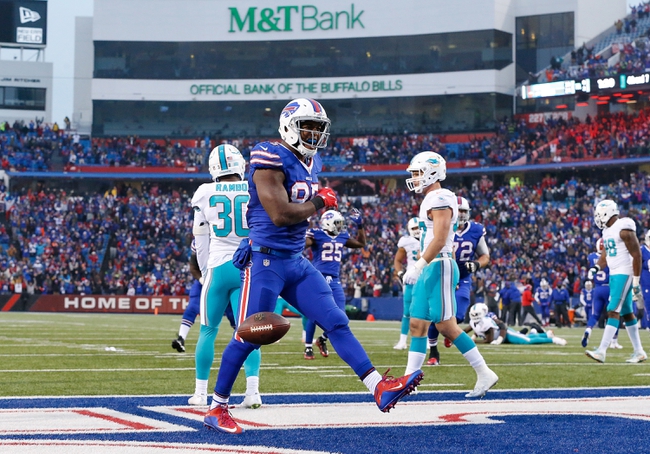 The Miami Dolphins look for a third straight victory to get back to a .500 record and keep their AFC wild card hopes alive. The Miami Dolphins have lost their last three road games. Jay Cutler is completing 64.1 percent of his passes for 2,100 yards, 18 touchdowns and 11 interceptions. Cutler has two or more touchdown passes in six of his last seven games. Kenny Stills and Jarvis Landry have combined for 1,496 receiving yards and 14 touchdowns while DeVante Parker has 40 receptions. The Miami Dolphins ground game is averaging 87.4 yards per contest, and Kenyan Drake leads the way with 434 yards and two touchdowns. Defensively, Miami is allowing 24.5 points and 332.8 yards per game. Reshad Jones leads the Miami Dolphins with 92 tackles, Cameron Wake has eight sacks and Xavien Howard has four interceptions.

The Buffalo Bills look for another victory after splitting their last 12 games to remain in the AFC wild card hunt. The Buffalo Bills have won five of their last seven home games. Nathan Peterman is completing 49 percent of his passes for 252 yards, two touchdowns and five interceptions. Peterman and Tyrod Taylor are both questionable for this game due to injuries. Charles Clay and LeSean McCoy have combined for 693 receiving yards and three touchdowns while Deonte Thompson has 20 receptions. The Buffalo Bills ground game is averaging 130.1 yards per contest, and McCoy leads the way with 1,007 yards and five touchdowns. Defensively, Buffalo is allowing 22.3 points and 351.2 yards per game. Preston Brown leads the Buffalo Bills with 107 tackles, Shaq Lawson has four sacks and Micah Hyde has five interceptions.

Tyrod Taylor is expected to play despite a knee injury, but I'm not sure that matters here. The Bills have gotten little out of their quarterback recently and it's expected to be another snow game in the low 30s. While Buffalo has more experience playing in the crappy weather, it's the Dolphins who are playing better football overall. Miami's offensive line has stepped up big the last couple of weeks and Kenyan Drake looks like a possible star in the making. I'm just not sold on the Bills, a team that's been so up and down the last few weeks and nearly found a way to lose to the Colts last week. Not to mention points will be hard to come by in this game, so there's value with the free field goal and the hook. Give me the Miami Dolphins and the free points....