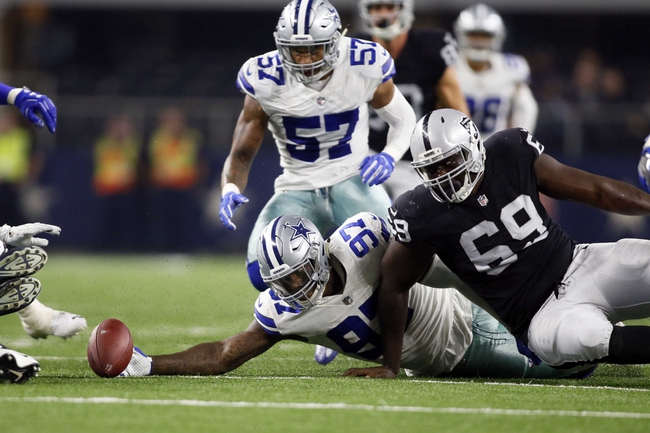 The NFL’s Week 15 installment of “Sunday Night Football” is a good one as the Dallas Cowboys visit the Oakland Raiders out at O.co Coliseum.

The Cowboys enter this matchup at 7-6 so far. After three straight losses, Dallas has won divisional games versus the Redskins and Giants in their last two. In that New York game, Dallas QB Dak Prescott put up 332 yards and three TDs.

This season, Prescott has amassed 2752 yards with 21 TDs and nine INTs, and Ezekiel Elliott is still the lead Dallas rusher on 783 yards and seven TDs. Dez Bryant tops out the Cowboys receiving corps on his 712 yards and six scores from 61 receptions.

Over on the Raiders’ side, they’re currently 6-7 on the season. Oakland had two wins over Denver and the Giants, but lost in their last game to Kansas City. In that Chiefs game, Raiders QB Derek Carr logged 211 yards, one TD and two picks.

This year, Carr has put up 2942 yards with 18 TDs and 10 INTs, and Marshawn Lynch is the leading Raiders rusher with 619 yards and seven TDs. Jared Cook is the head Oakland receiver with 621 yards, two TDs and 48 catches.

Dallas has a tough road ahead of them with games against the Raiders, Seahawks and Eagles still on the schedule—and two of those are on the road. As for Oakland, they’ve got an equally daunting trio ahead of them: Dallas, Philadelphia and the Chargers. The Raiders came up sketchy against that KC defense, and haven’t exactly been blowing anyone out in their wins recently (a one-score margin in their last four). I like the Cowboys to hold strong here and cover.