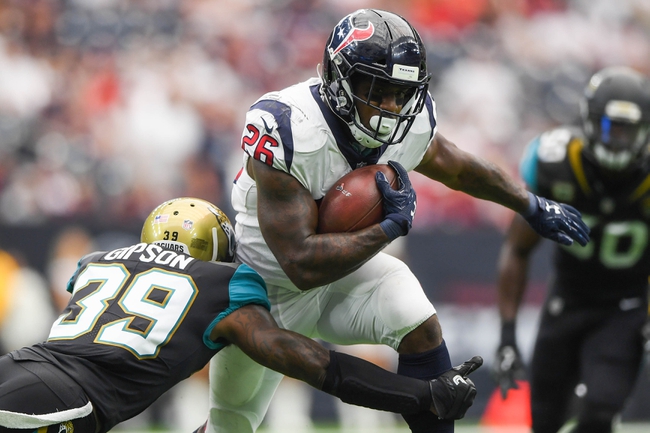 Out at EverBank Field on Sunday, the Houston Texans will be visiting the Jacksonville Jaguars in NFL activity for Week 15.

Houston is sitting at 4-9 on the year so far. The Texans have dropped their last three games straight to Baltimore, Tennessee and San Francisco. In that Niners game, Houston QB TJ Yates put up 175 yards with two TDs.

That was Yates’ lone game of the year, as the injured DeShaun Watson still leads the Texans QBs with 1699 yards and 19 TDs. Lamar Miller is the top Houston rusher on 764 yards and three scores, while DeAndre Hopkins has 1233 yards with 11 TDs and 88 catches.

Over on the Jaguars’ side, they’re coming into this one with a 9-4 record. Jacksonville lost to Arizona but then won their next two games versus the Colts and Seahawks. In that Seattle game, Jacksonville QB Blake Bortles managed 268 yards and two TDs.

Bottles has put up 2821 yards with 16 TDs and eight INTs this year, and Leonard Fournette is the top Jaguars rusher with 923 yards and eight touchdowns. Leading the way in receiving for Jacksonville is Marqise Lee on 702 yards, three scores and 56 catches.

Houston has looked pretty bad over the last three games, scoring a combined 45 points in that trio. If there’s any silver lining here, its that the defense hasn’t been awful, allowing no more than 26 points over the last four games. As for Jacksonville, they’ve been a little sketchy here and there recently but in their last two games they’ve put up 60 points while allowing 34 combined. I like the Jags to come out and assert some dominance here for a cover.