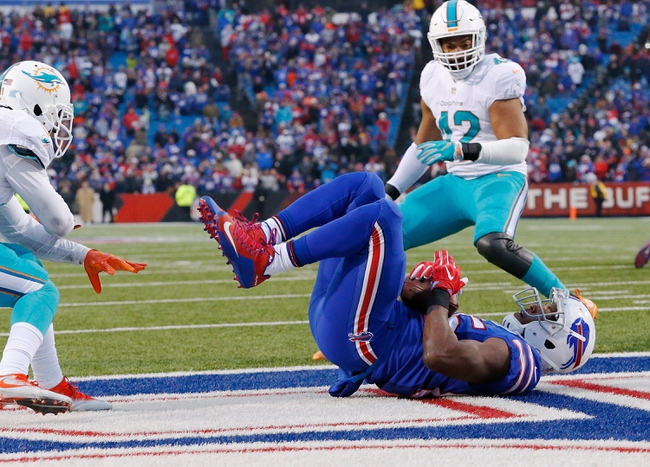 Out at Ralph Wilson Stadium on Sunday, we’ve got AFC East action in the NFL coming between the Miami Dolphins and the Buffalo Bills.

Miami enters this game with a 6-7 record so far. The Dolphins had a five-game losing streak before beating Denver and New England in succession. In that Patriots game, Dolphins QB Jay Cutler put up 263 yards and three TDs.

This season, Cutler has 2100 yards with 18 TDs and 11 INTs, and Kenyan Drake is the top Dolphins rusher with 434 yards and two scores. Kenny Stills heads up the Dolphins receiving corps on 751 yards with six touchdowns on 50 receptions.

Over on the Bills’ side, they’re sitting at 7-6 this year. Buffalo has won just two games in their last six outings, beating Kansas City and Indianapolis. In that Colts game, Buffalo QB Nathan Peterman threw for 57 yards and a TD in blizzard-like conditions.

On the year, Tyrod Taylor is the top Buffalo QB on 2090 yards, 12 TDs and four picks, while LeSean McCoy heads up the rush with 1007 yards and five TDs. Charles Clay is the leading Bills receiver with 389 yards, two TDs and 34 receptions.

Miami is back in the playoff hunt, but they’re going to have to win out to have a shot at eking in. That will include two games against the Bills and a road game in KC, so it’s doable but not exactly a given. Buffalo is in something of the same boat, but will have to play Miami twice with a difficult road game against the Pats mixed in there. This is a tough one to call, but I’m going with the Dolphins to stay hot after that big win last week.