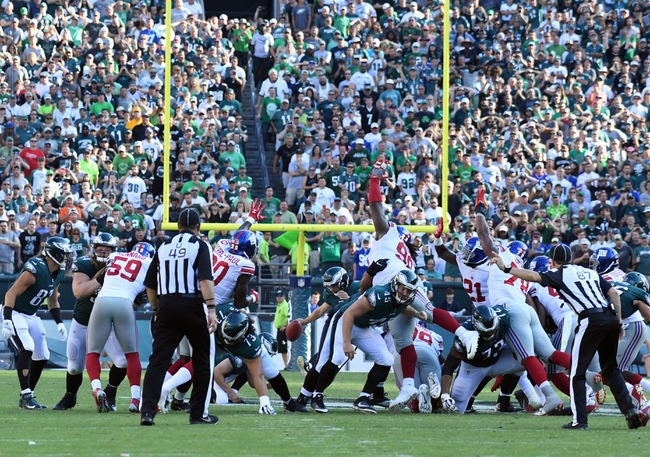 The New York Giants have a chance to play spoiler here while snapping a three-game losing streak. The New York Giants have lost five of their last six home games. Eli Manning is completing 63 percent of his passes for 2,639 yards, 15 touchdowns and nine interceptions. Manning has one or less touchdown passes in five of his last seven games. Evan Engram and Sterling Shepard have combined for 1,170 receiving yards and seven touchdowns while Odell Beckham Jr. has 25 receptions. The New York Giants ground game is averaging 90.1 yards per contest, and Orleans Darkwa leads the way with 580 yards and three touchdowns. Defensively, New York is allowing 24.7 points and 395.7 yards per game. Landon Collins leads the New York Giants with 102 tackles, Jason Pierre-Paul has 6.5 sacks and Janoris Jenkins has three interceptions.

The Philadelphia Eagles are much more than Carson Wentz, as they have a quality defense and playmakers on offense, including deep running back depth that can takeover drives. But having Wentz out for the season and Foles at quarterback is a major drop off. Foles has been a backup the last couple of years for a reason, and he has just 69 pass attempts the last two years combined. Sure, he knows the system being around the team for a while, but thinking he's going to step in and the Eagles will keep on marching is a little naive. The Giants have not scored more than 17 points in each of the last four weeks and have little to play for at this point, but they should have their chances playing a backup quarterback. Not to mention when these teams met back in Week 3, it was decided by a last second field goal. I'm not seeing the reason why the Eagles are such big favorites here. Give me the Giants at hoem and the points.