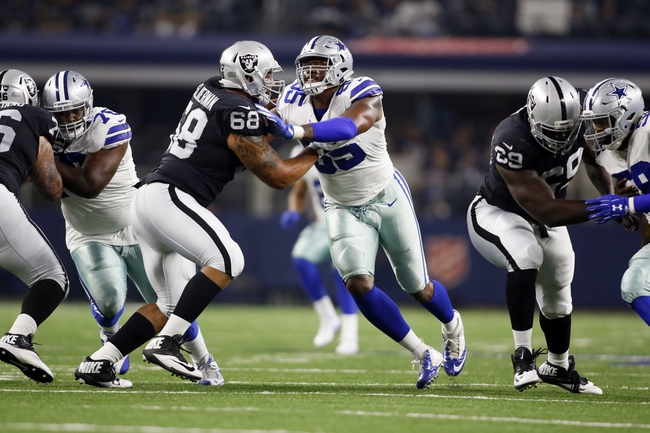 The Dallas Cowboys look for a third straight victory to keep their NFC playoff hopes alive. The Dallas Cowboys have won four of their last five road games. Dak Prescott is completing 63.2 percent of his passes for 2,752 yards, 21 touchdowns and nine interceptions. Prescott has two or more touchdown passes in six of his last 10 games. Dez Byrant and Terrance Williams have combined for 1,213 receiving yards and six touchdowns while Jason Witten has 52 receptions. The Dallas Cowboys ground game is averaging 137.5 yards per contest, and Ezekiel Elliott leads the way with 783 yards and seven touchdowns. Defensively, Dallas is allowing 22.6 points and 341.6 yards per game. Jaylon Smith leads the Dallas Cowboys with 76 tackles, DeMarcus Lawrence has 13.5 sacks and Jeff Heath has three interceptions.

The Oakland Raiders also need a win here after splitting their last eight games to remain in the AFC playoff conversation. The Oakland Raiders have won three of their last four home games. Derek Carr is completing 63.8 percent of his passes for 2,942 yards, 18 touchdowns and 10 interceptions. Carr has one touchdown pass in five of his last six games. Jared Cook and Michael Crabtree have combined for 1,183 receiving yards and eight touchdowns while Amari Cooper has 42 receptions. The Oakland Raiders ground game is averaging 91.5 yards per contest, and Marshawn Lynch leads the way with 619 yards and seven touchdowns. Defensively, Oakland is allowing 23.2 points and 346 yards per game. TJ Carrie leads the Oakland Raiders with 71 tackles, Khalil Mack has 8.5 sacks and Denico Autry has seven pass deflections.

The Dallas Cowboys have put together back-to-back blowouts to keep their playoff hopes alive, but those wins were against poor NFC East teams, so I'm not sure how much stock you put into that. The Cowboys have been a hit or miss team all season long, and even with their recent blowouts, they're still averaging just 18 points in their last five games. The Raiders are coming off a tough road loss to Kansas City, but they've been much better at home this season and should see a better version of Derek Carr after he took 100 percent of the blame and said he will be better. That type of stuff can raley a team the following week. Also, the Cowboys are making a trip from New York to Oakland, the type of miles that does have a neigitve impact. You can also say the Raiders have more to play for, as the AFC West is still wide open, while the Cowboys are barely holding onto wild card hopes with a million teams ahead of them. The value is with the Raiders and the free field goal.