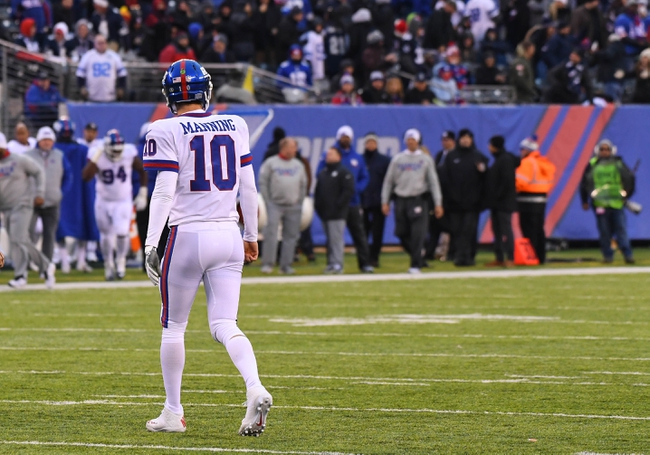 We have an NFC East division tilt on tap in week 15 NFL action, as the Philadelphia Eagles take on the New York Giants from MetLife Stadium.

The Philadelphia Eagles will try to bounce back from a massive loss in their last outing. The Eagles defeated the L.A. Rams by a final score of 43-35, but lost starting QB and MVP candidate Carson Wentz to a torn ACL and he is out for the remainder of the season. Wentz threw for 291 yards, 4 touchdowns and an interception on 23 of 41 passing, while Nick Foles stepped in in relief for 42 yards on 6 of 10 passing. Jay Ajayi rushed for 78 yards on 15 carries, while Torrey Smith led the Eagles in receiving with 100 yards on 6 catches. Trey Burton added 5 receptions for 71 yards and a pair of touchdowns, while Nelson Agholor caught a team-high 8 passes for 64 yards. Alshon Jeffery and Brent Celek each added receiving scores of their own in the win as well. Defensively, the Eagles combined for a pair of sacks and a pair of forced fumbles, one of which was recovered, all while giving up 307 yards and just under 21 minutes of possession to the Rams in the win.

The New York Giants will look for a division victory to snap a 3 game losing streak after falling to 2-11 this season after a 30-10 loss to Dallas last time out. Eli Manning threw for 228 yards, a touchdown and 2 interceptions on 31 of 46 passing, while Wayne Gallman led the team in rushing with 12 rushed for 59 yards. Evan Engram led the G-Men with 54 receiving yards on 4 catches, while Roger Lewis and the aforementioned Gallman added a team-high 7 catches apiece. Rhett Ellison logged the Giants’ lone touchdown in the losing effort. On defense, the Giants won the time of possession battle, but that didn’t stop Dallas from putting up 454 yards of total offense on Big Blue in the game.

It’s not often that you see the team with the best record in the league, laying just over a touchdown against one of the worst in the league, but I think that speaks to the impact of the loss of Carson Wentz. Nick Foles is a long way removed from his time as a starting pivot where he threw for 27 touchdowns and 2 interceptions in a season, four years ago to be exact. The Giants are playing for pride down the stretch, and regardless of record, this is a rivalry game. Say what you want about the Giants, and yes they’ve looked brutal at times this season, but the last 4 meetings have been decided by 5 points or less, including a 3 point game earlier this season. I think the loss of Wentz will take some time to get used to and I think the Giants have the potential to deal a blow to Philly’s hopes of home field throughout the playoffs, so I’ll take New York and the points in a game I could see the Giants winning.