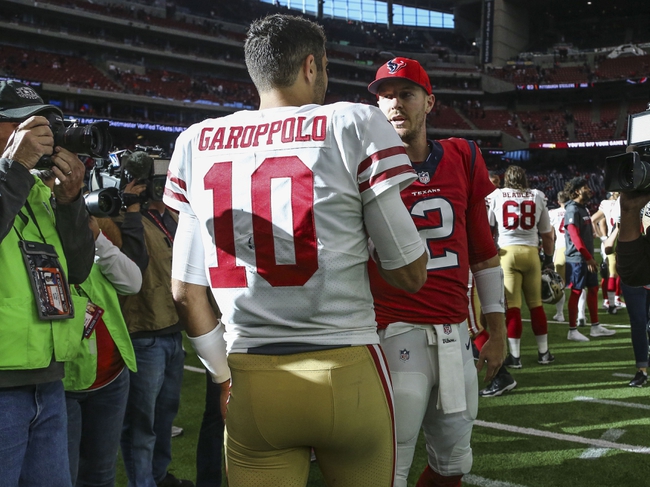 We have some inter-conference action as the Tennessee Titans take on the San Francisco 49ers in week 15 NFL action.

The Tennessee Titans will look to bounce back after a 12-7 loss dropped the Titans to 8-5 this season. Marcus Mariota threw for 159 yards and 2 interceptions on 16 of 31 passing, while DeMarco Murray rushed for a team-high 34 yards on 11 carries. Derrick Henry added 20 rushing yards and the team’s lone touchdown in the loss. Eric Decker led the team with 56 receiving yards, while Delanie Walker caught a team-high 5 passes for 42 yards in the loss. The Titans defense combined for a whopping 8 sacks, but that was about all the Titans could do as the Cardinals logged 261 yards of total offense and a 3 for 14 mark on 3rd down in the game.

The San Francisco 49ers will look to push their win streak to 3 games after winning back-to-back outings thanks to a 26-16 win over Houston last time out. Jimmy Garoppolo threw for 334 yards, a touchdown and an interception on 20 of 33 passing. Carlos Hyde rushed for a team-high 78 yards and a touchdown on 14 carries, while Marquise Goodwin led the Niners in receiving with 6 catches for 106 yards and Garrett Celek added a pair of catches for 67 yards and a touchdown. On defense, the 49ers combined for 3 sacks and a forced fumble that they also recovered, all while giving up 311 yards of total offense with a 3 for 13 mark on 3rd down and holding the Texans to just over 25 minutes of possession in the victory.

I really want to take the free points with the Titans who are still in a dogfight for their division. However, I said it last week when I caught the Niners, and I’m saying it again, this is a different team with Garoppolo under center. The 49ers have finaly gotten a taste of what it’s like to win consistently, and even though each win hurts their draft position, San Fran is playing to their potential finally and will want to finish strong to give the fan base something to look forward to next year. I’ll lay the points with San Fran here for an unexpected 3 game winning strak.