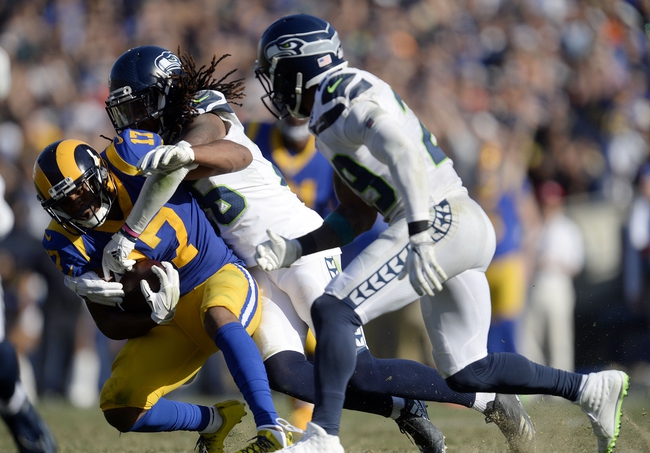 Up at CenturyLink Field on Sunday afternoon, the NFL is bringing us a great Week 15 matchup between the Los Angeles Rams and the Seattle Seahawks.

The Rams enter this game with a 9-4 record overall. LA had won two straight versus the Saints and Cardinals, but dropped a tough one against the Eagles this past Sunday. In that one, Rams QB Jared Goff managed 199 yards and two TD throws.

Goff comes into Week 15 with 3383 yards, 22 TDs and six INTs, while todd Gurley leads the Rams rush on 1035 yards and 10 TDs. The young Cooper Kupp is the top Rams receiver with 783 yards and four TDs to his credit.

Over on the Seahawks’ side, they’re currently 8-5 on the season. Seattle had beaten the 49ers and Eagles in a two-game stretch but lost their last one to Jacksonville. In that one, Seattle’s Russell Wilson threw for 271 yards, three TDs and three picks.

Wilson has 3527 yards on the season along with 29 touchdowns and 11 interceptions, and he’s also Seattle’s leading rusher with 482 yards and three scores. Doug Baldwin is the leading Seahawks receiver with his 860 yards, five touchdowns and 66 catches.

The Eagles/Rams game was everything fans could have hoped for, and LA could easily have won that game. Still, there’s a bit of a concern for LA as their matches against “good” teams haven’t gone their way for the most part. The last time these two met on October 8, the Seahawks bagged a 16-10 win. I expect the Rams to score more in this one, but with this game being in Seattle I have to take the Seahawks to cover. All in all it’s probably one to stay away from, though.