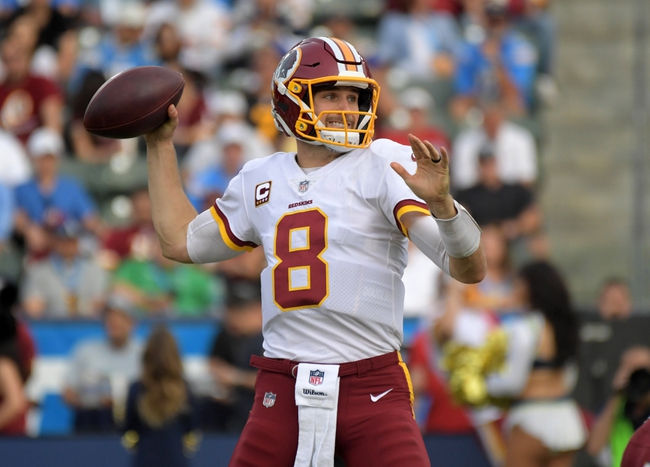 The Arizona Cardinals and the Washington Redskins square off in week 15 NFL action from FedEx Field on Sunday afternoon.

The Arizona Cardinals come into this one looking to build some steam after a 12-7 victory over the Tennessee Titans in their last outing to climb to 6-7 this season. Blaine Gabbert threw for 189 yards on 17 of 26 passing, while Kerwynn Williams led the Cards in rushing with 20 carries for 73 yards. Chad Williams’ lone rush went for 33 yards, while Larry Fitzgerald led the team in receiving with 5 catches for 44 yards in the win. On the defensive side of the ball, the Cardinals combined for 3 sacks and a pair of interceptions while holding the Titans to just 204 yards of total offense and 26 minutes of possession in the win.

The Washington Redskins will try to finish the season on a positive note down the stretch after dropping back-to-back games, including a 30-13 loss to the L.A. Chargers in their last outing to drop to 5-8 this season. Kirk Cousins threw for 151 yards, a touchdown and an interception on 15 of 27 passing, while Samaje Perine led the team in rushing with 17 carries for 45 yards. Josh Doctson and Jamison Crowder tied for the team lead in receiving with 3 catches and 34 yards apiece, while Vernon Davis added the team’s lone offensive touchdown. Defensively, the ‘Skins combined for a pair of sacks and an interception that turned into a 96-yard pick-six from Beshaud Breeland, but that was about all the Redskins could hang their hats on as Washington allowed 488 yards of total offense and over 35 minutes of possession to the Chargers in the loss.

I won’t lie, when Carson Palmer went down, I thought the Cardinals would be dead in the water. But Gabbert has been serviceable, and the defense is getting the job done. Plus, Arizona still has a better chance of a wild card push than Washington does, and every win from here on out hurts Washington’s draft prospects, and considering that Arizona has had the bulk of the success ATS when these two teams meet, I’ll take a shot with Arizona and the points.