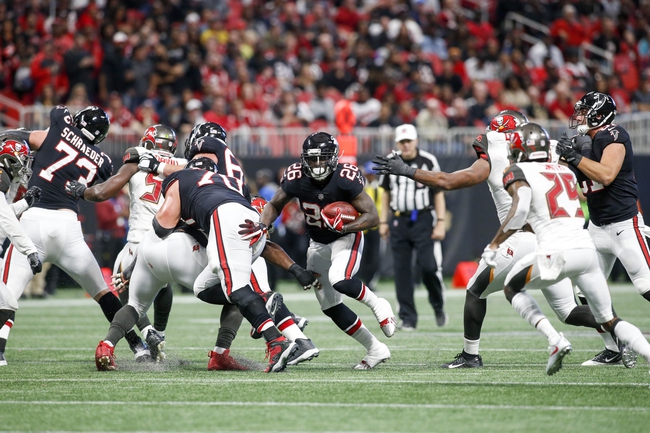 Capping off the Week 15 NFL action from Raymond James Stadium on “Monday Night Football,” the Atlanta Falcons will be matching up with the Tampa Bay Buccaneers.

Atlanta enters this game with an 8-5 record overall. the Falcons have won four of their last five games versus the Cowboys, Buccaneers and Saints. In that Saints game, Falcons QB Matt Ryan put up 173 yards with one TD and three picks.

Ryan is sitting on 3278 yards with 17 TDs and 11 INTs so far this year, while Devonta Freeman is the head Falcons rusher with 680 yards and six scores. Julio Jones is of course the top Atlanta receiver with 1161 yards and three touchdowns from 73 catches.

Over on the Tampa Bay side, they’re sitting at 4-9 on the season. The Buccaneers have lost their last three games versus the falcons, Packers and Lions. In that Detroit game, Bucs QB Jameis Winston logged 285 yards, two touchdowns and two picks.

Winston currently has 2475 yards with 14 TDs and eight interceptions, and Doug Martin is the top Bucs rusher with 402 yards and three touchdowns. Heading up the Tampa receiving corps is Mike Evans with 760 yards and four touchdowns from 55 catches.

After a rough patch in the middle of the season, the Falcons seem to be back on track. Atlanta is still prone to fits of futility against good defenses, however. The last time these teams met, it was a 34-20 Atlanta home victory. This one might be a little closer but I still like Atlanta to stay hot and cover here.