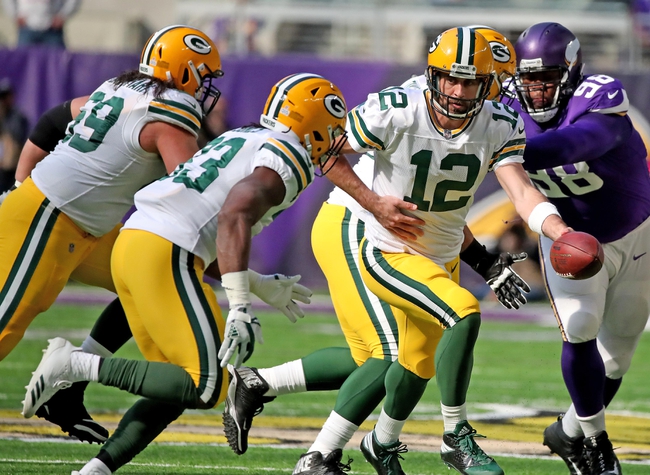 We have a crucial NFC North showdown on tap Saturday evening, as the Minnesota Vikings take on the Green Bay Packers from Lambeau Field.

The Minnesota Vikings will set their focus onto clinching a bye and possibly home field after improving to 11-3 this season thanks to a 34-7 dismantling of Cincinnati in their last outing. Case Keenum threw for 236 yards and 2 touchdowns on 20 of 23 passing, while Latavius Murray led the Vikes in rushing with 20 carries for 76 yards and a touchdown. Jerick McKinnon led the Vikings in receiving with 7 catches for 114 yards, while Stefon Diggs added 5 catches and a TD, and Kyle Rudolph added a touchdown grab of his own. On defense, The Vikings combined for 3 sacks and a pair of interceptions, one of which Eric Kendricks returned 31 yards for a touchdown. All of this while holding the Bengals to just 161 yards of total offense and a 1 for 13 mark on 3rd down with just over 24 minutes of possession in the win.

The Green Bay Packers need a win here to keep their slim playoff hopes alive after falling back to .500 thanks to a 31-24 loss to Carolina in their last outing. Aaron Rodgers threw for 290 yards and 3 touchdowns that were cancelled out by 3 interceptions on 26 of 45 passing. Aaron Jones rushed for 47 yards on 3 carries, while Rodgers rushed for 43 yards and Jamaal Williams took his team-high 10 carries and turned them into 30 rushing yards. Randall Cobb led the team with 7 catches for 84 yards and a touchdown, while Richard Rodgers added 77 receiving yards and a score and Davante Adams added 5 catches for 57 yards and a TD before leaving due to injury. On defense, a Kenny Clark sack was the lone individual highlight as the Panthers put up 387 yards of total offense and converted on 50% of their 12 3rd down attempts while giving up almost 34 minutes of possession to Carolina in the game.

Both of these teams still have something to play for, and although Green Bay is the more desperate of the two, there will be no Aaron Rodgers for this one, and there’s no overlooking how well the Vikings have played to this point. They may have the division locked up, but there’s still an outside chance at home field throughout the playoffs and Minnesota is still fighting for a first round bye. I think the loss of Rodgers here makes all the difference, and the Vikings take this one with relative ease.