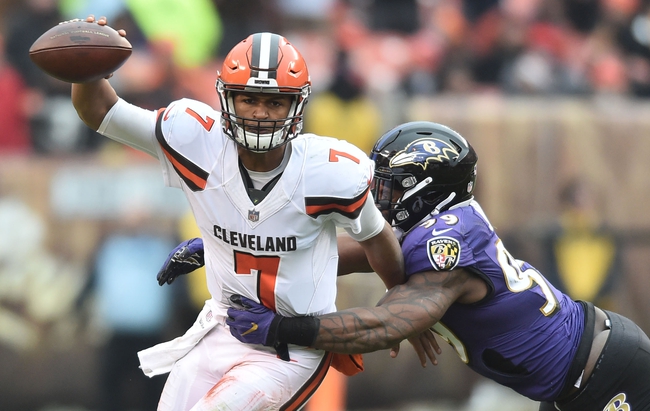 The Cleveland Browns and the Chicago Bears face off from Soldier Field on Sunday afternoon in week 16 NFL action.

The Cleveland Browns come into this one still looking for that elusive first win of the season, after dropping to 0-14 thanks to a 27-10 loss to Baltimore in their last outing. DeShone Kizer threw for 146 yards and a pair of interceptions on 20 of 37 passing, while Isaiah Crowell led Cleveland in rushing with 72 rushing yards on 5 carries and Duke Johnson Jr. added 23 yards on the ground with the team’s lone touchdown. Josh Gordon led the team with 5 catches for 47 yards, while Johnson Jr. added 5 catches of his own in the loss. On defense, a Trevon Coley sack was the lone individual highlight as the Browns allowed 376 yards of total offense, a 7 for 16 mark on 3rd down and just under 37 minutes of possession in the win.

The Chicago Bears will look to bounce back from a 20-10 loss to the Detroit Lions in their last outing, falling to 4-10 in the process. Mitchell Trubisky threw for 314 yards, a touchdown and 3 interceptions on 31 of 46 passing. Jordan Howard led the Bears with 10 carries for 37 yards, while Kendall Wright added 7 catches for 81 yards to lead the team in receiving and Josh Bellamy chipped in 5 catches for 70 yards. On defense, the Bears combined for 4 sacks, a forced fumble and an interception while holding the Lions to 293 yards of total offense in the losing effort.

I know all I’ve done is rag on the Browns week in and week out. But I got to thinking, the Browns pretty much have the worst record in the league locked up and almost have the top pick in next year’s draft locked up. The Browns are playing for pride at this point and have two more chances to get a win and it probably won’t end well next week against a Steelers team that’s had their number over the years. Chicago is a solid team at home, but every win hurts their draft stock and although they don’t want to be THAT team that lost to the Browns, I think Cleveland has a real shot at pulling the upset this week, so even though I can’t believe I’m saying it, I’ll take Cleveland and the points in a game I personally have the Browns winning outright.