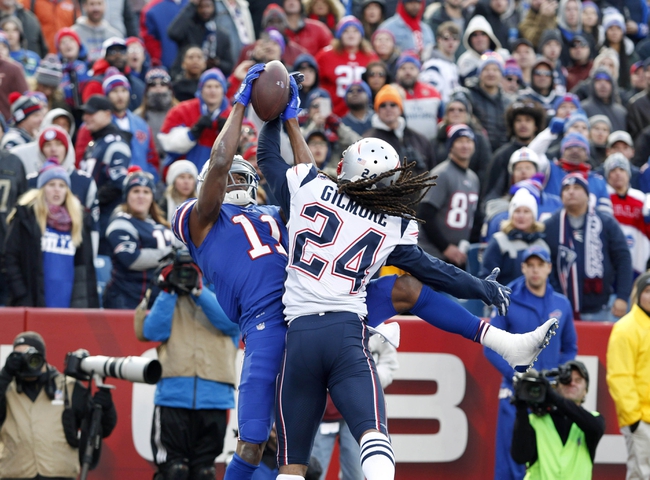 Coming up in Christmas Eve NFL action from the AFC East, we’ve got a matchup between the Buffalo Bills and the New England Patriots out at Gillette.

The Bills are sitting at 8-6 on the season. Buffalo has won three of their last four games versus the Chiefs, Colts and Dolphins. In that Dolphins game, Bills QB Tyrod Taylor logged 224 yards and a TD.

Taylor is sitting on 2314 yards with 13 TDs and four interceptions this season, while LeSean McCoy is the top Bills rusher with 1057 yards and six scores from 259 totes. Charles Clay leads the Buffalo receiving corps with 457 yards and two TDs from 39 catches.

Over on the Patriots’ side, they’re currently 11-3 this season. New England lost a shocker to Miami in Week 14 but came back with a (highly controversial) win over the Steelers this past Sunday. In that one, Pats QB Tom Brady put up 298 yards with one TD and one INT.

Brady currently has 4163 yards with 28 TDs and seven picks this year, and Dion Lewis is the Pats’ top rusher on 674 yards and four scores. Rob Gronkowski leads the New England receivers with his 1017 yards and seven TDs from 64 catches.

The Bills continue to perform beyond expectation, and they’re in control of their own Wild Card destiny. The Buffalo defense has been coming up big lately, allowing 16 points or fewer in three of the last four. The other game was against the Patriots, who beat Buffalo 23-3 on December 3. The plucky Bills’ luck may have run out here, as they don’t have enough offense to keep up with Brady and the gang. I’m sticking with New England.