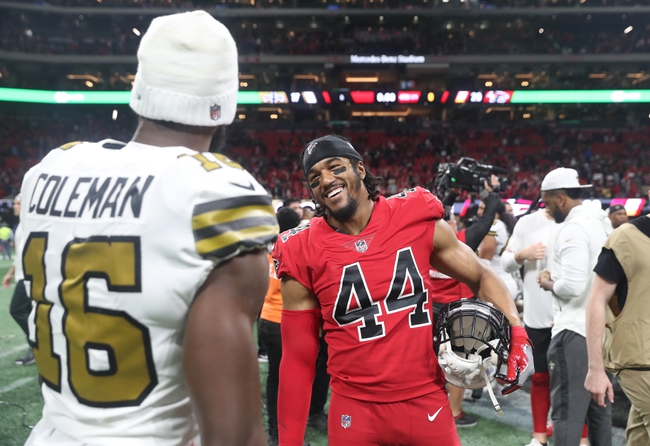 The Atlanta Falcons have won five of their last six games and need another win to stay in the thick of the NFC playoff race. The Atlanta Falcons have won three of their last four road games. Matt Ryan is completing 65.2 percent of his passes for 3,490 yards, 18 touchdowns and 11 interceptions. Ryan has one or less touchdown passes in each of his last four games. Julio Jones and Mohamed Sanu have combined for 1,816 receiving yards and eight touchdowns while Austin Hooper has 43 receptions. The Atlanta Falcons ground game is averaging 122.9 yards per contest, and Devonta Freeman leads the way with 806 yards and seven touchdowns. Defensively, Atlanta is allowing 20.1 points and 323.6 yards per game. Deion Jones leads the Atlanta Falcons with 118 tackles, Adrian Clayborn has 9.5 sacks and Robert Alford has 16 pass deflections.

The New Orleans Saints had their chances to beat the Atlanta Falcons on the road a couple of weeks ago, so getting this game at home and catching them on short rest is a good spot. The Falcons are doing a good job of winning games, but they're struggling to put teams away and could have easily been on the losing side in a lot of these games. If Seattle or Tampa Bay made a last second field goal, the Falcons are going into overtime in both contests, and who knows what happens then. The Saints have been lights out at home this season with several double digit victories, and if the Falcons continue to struggle with offensive consistency, this is another contest that could get ugly. I'll take New Orleans by a touchdown.