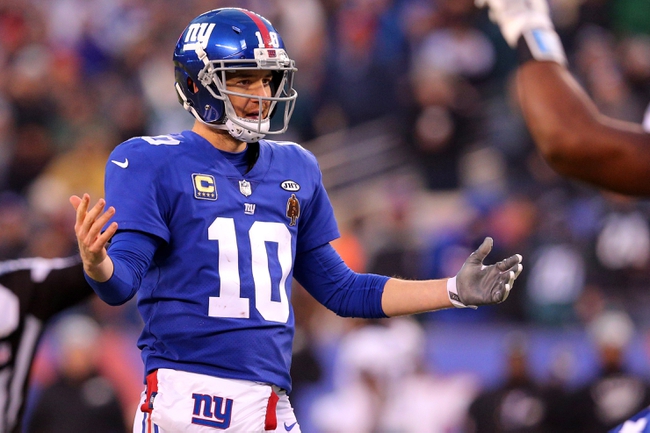 Down at University of Phoenix Stadium on Sunday, the New York Giants and the Arizona Cardinals will be meeting up in NFL activity.

The Giants come into this one with a 2-12 record. New York has lost their last four games straight, falling to the Redskins, Raiders, Cowboys and Eagles in that time. In the Eagles game, New York QB Eli Manning put up 434 yards and three TDs.

This season, Manning has come up with 3073 yards, 18 TDs and 10 picks, while Orleans Darkwa is the top Giants rusher on 587 yards and four touchdowns. Evan Engram leads the Giants in receiving with 710 yards and six scores.

Over on the Cardinals’ side, they’re sitting at 6-8 on the season. Arizona has lost two of their last three games versus the Rams, Titans and Redskins. In the Redskins game, Cardinals QB Blaine Gabbert put up 189 yards and a pick.

Gabbert has managed 1086 yards this year with six TDs and six INTs, and Adrian Peterson leads the Cards in rushing on 448 yards and two scores. Larry Fitzgerald is the top Arizona receiver once again with 982 yards and five TDs.

The Giants are something of a mess right now, but at least they’re not getting outright destroyed for the most part over the last six weeks or so. Arizona isn’t sniffing the playoffs this year either, and they’ve scored 16 points or fewer in each of their last three games. There’s not a lot to like about this matchup and it will probably be near unwatchable at times, but I’m going with the better QB here and that’s Manning. Give me the Giants.