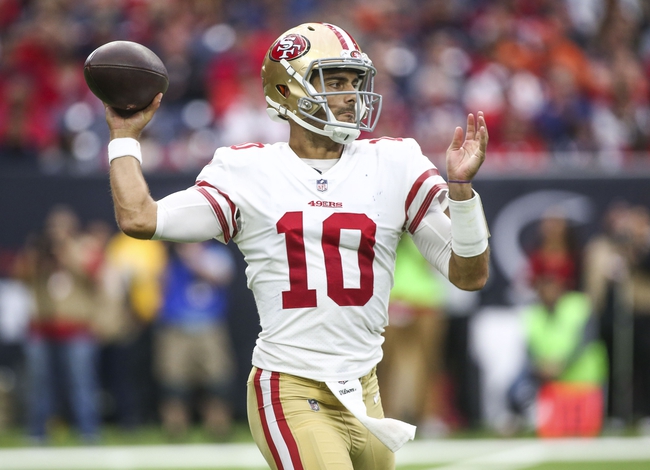 Out at Levi’s Stadium on Sunday (Christmas Eve), the Jacksonville Jaguars and the San Francisco 49ers will meet up in a cross-country NFL battle.

Jacksonville sits at 10-4 this season. The Jaguars have won seven of their last eight and three in a row over the Colts, Seahawks and Texans. In that Houston game, Jags QB Blake Bortles posted 326 yards with three touchdowns.

This season, Bortles has 3147 yards with 19 TDs and eight picks, while Leonard Fournette is the top Jags rusher on 923 yards and eight scores. Heading up the Jacksonville receiving corps is Marqise Lee, with 702 yards and three TDs from 56 catches.

Over on the San Francisco side, they’re sitting at 4-10 on the year. The Niners have won their last three games in a row, however, beating the Bears, Texans and Titans. In the Tennessee game, 49ers QB Jimmy Garoppolo put up 381 yards and a TD.

On the year, Garoppolo has 1026 yards with three touchdowns and two picks, while Carlos Hyde leads the rushing in San Francisco on 796 yards and five scores. Marquise Goodwin is the top receiver for the Niners on 897 yards and one TD from 51 grabs.

The Jaguars are one of the NFL’s feel-good stories this year, and they’ll be appearing in the playoffs for the first time since 2007. Bortles has been awesome as of late, guiding the offense to a combined 105 points over the last three games. As for San Francisco, they were awful for most of the year but turned completely around with the acquisition of Garoppolo, and now the future is starting to look bright for the Niners. This should be an interesting matchup, but all things considered I don’t think the 49ers offense can overcome that Jacksonville D. I’ll take the Jags here.