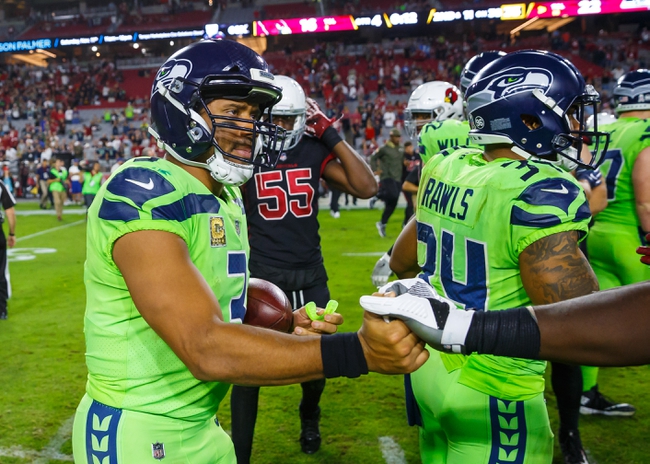 The Arizona Cardinals and the Seattle Seahawks square off in an NFC West showdown to close out their respective 2017 NFL regular season schedules.

The Arizona Cardinals will look to finish the year .500 after climbing to 7-8 with a 23-0 win over the Giants in their last outing. Drew Stanton threw for 209 yards and 2 touchdowns that were cancelled out by a pair of interceptions on 20 of 34 passing. Kerwynn Williams led the Cardinals with 51 rushing yards on 16 carries, while Larry Fitzgerald led the team in receiving with 9 catches for 119 yards and a touchdown. John Brown added a pair of catches for 28 yards and a score, while D.J. Foster added 3 catches. On defense, the Cardinals combined for a pair of sacks, a pair of forced fumbles along with a pair of interceptions from Antoine Bethea, all while holding the G-Men to 293 yards of total offense in the win.

The Seattle Seahawks will look to sneak into the playoffs, entering week 17 in a tie for the 2nd wild card spot with Atlanta, sitting at 9-6 following a 21-12 victory over Dallas last time out. Russell Wilson threw for 93 yards and a pair of touchdowns on 14 of 21 passing, while also rushing for a team-high 29 yards on 9 carries. Doug Baldwin led the team with 4 catches for 35 yards and a touchdown, while Paul Richardson added 21 yards and Mike Davis added 4 catches of his own. Jimmy Graham caught a 3-yard TD with his lone reception in the winning effort for Seattle. On defense, the Seahawks combined for 3 sacks, a forced fumble that they also recovered and a pair of sacks, including a 30-yard pick-six from Justin Coleman.

The most dangerous team in week 17 is a team with nothing to lose going up against a team with everything on the line. I think Seattle will probably win this game, but this seems like too many points to give up in a game that Seattle will be trying to just not lose. This doesn’t feel like the type of game that Seattle will run away with despite a lot of shortcomings that Arizona has had this season, and the road team has covered in 5 of the last 6 meetings between these two teams with the one other one being a push. Add in the underdog’s success in this matchup, and I think one of the better plays this week is to take Arizona and the points.