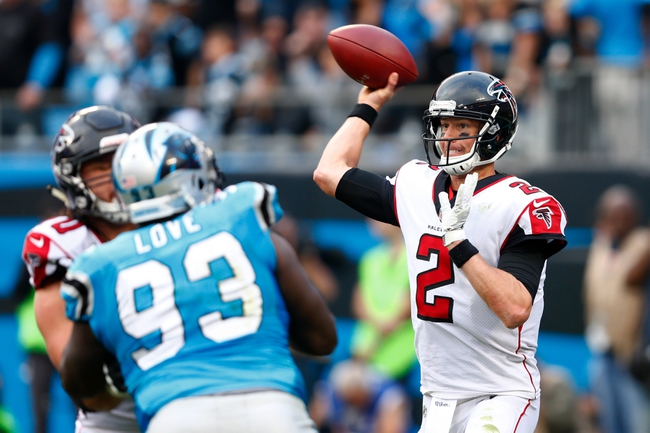 There are playoff implications in an NFC South showdown in week 17 NFL action, as the Carolina Panthers face off against the Atlanta Falcons.

The Carolina Panthers will look to finish the season strong after winning their 3rd straight game to improve to 11-4 this season with a 22–19 victory over Tampa Bay in their last outing. Cam Newton threw for 160 yards and an interception on 16 of 25 passing, while also leading the team in rushing with 52 yards on 14 carries with the team’s lone touchdown in the win. Brenton Bersin led the team with 3 catches for 45 yards, while Greg Olsen and Devin Funchess each tallied 3 receptions apiece. On defense, the Panthers combined for 6 sacks and a pair of forced fumbles, both of which Julius Peppers recovered for Carolina as the Bucs put up 392 yards of total offense in the game.

The Atlanta Falcons will look to bounce back after a 23-13 loss to New Orleans in their last outing sent the team to 9-6 this season. Matt Ryan threw for 288 yards, a touchdown and an interception on 22 of 36 passing, while Devonta Freeman led the team in rushing with 36 yards on 11 carries. Julio Jones led Atlanta with 7 catches for 149 yards, while Tevin Coleman added 4 catches for 40 yards and a touchdown and Mohamed Sanu added 4 catches of his own in the loss. The Falcons’ D combined for a sack and an interception while holding the Saints to 315 yards of total offense and a 3 for 13 mark on 3rd down in the loss.

I was tempted to take the points with the Panthers as they’ve been the better and more consistent team this season. However, the Panthers are just playing for seeding right now, and Atlanta’s chance at redemption and a playoff spot rides on this game. Sometimes you just have to put some consideration into the situation both teams are faced with, so I’ll do that here and lay the points with Atlanta.