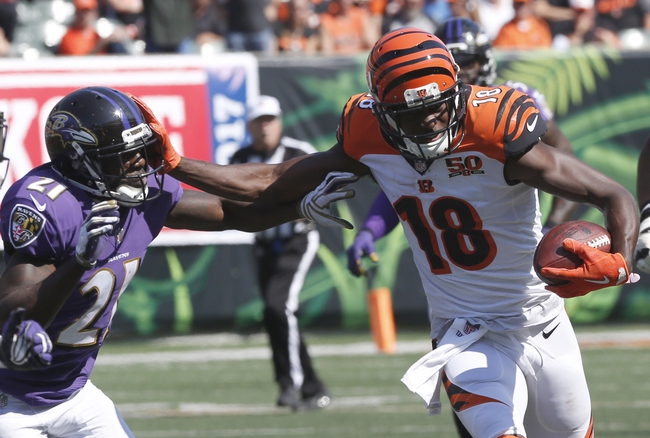 Out at M&T Bank Stadium on Sunday, we’ve got Week 17 NFL action from the AFC North between the Cincinnati Bengals and the Baltimore Ravens.

The Bengals come into this game at 6-9 on the season. Cincinnati had a three-game losing streak going before securing a 26-17 win over Detroit in their last game. Against the Lions, Bengals QB Andy Dalton put up 238 yards with one TD and a pick.

Dalton has logged 3098 yards with 22 TDs and 12 INTs this year, and Joe Mixon is the leading Cincinnati rusher on 530 yards and four scores. AJ Green is tops in the Bengals receiving game with 1061 yards and eight scores on 73 grabs.

Over on the Ravens’ side, they’re knocking on the door of the playoffs with a 9-6 record. Baltimore has won five of their last six games, including a 23-16 win over Indianapolis on Saturday. In that one, Baltimore QB Joe Flacco threw for 237 yards with two touchdowns.

Flacco comes into this one with 2938 yards, 16 TDs and 12 INTs, while Alex Collins is the lead Ravens rusher on 895 yards and five TDs. Mike Walace is tops in the Ravens receiving game on 708 yards and three scores.

Cincinnati should feel good about breaking that losing streak, especially after scoring just 14 combined points in a two-game stretch. Now the Bengals have a chance to potentially spoil Baltimore’s playoff chances, so that gives Cincinnati something to play for. That said, Baltimore has looked pretty darn good over the last six weeks and I like them to cover here. Give me the Ravens.