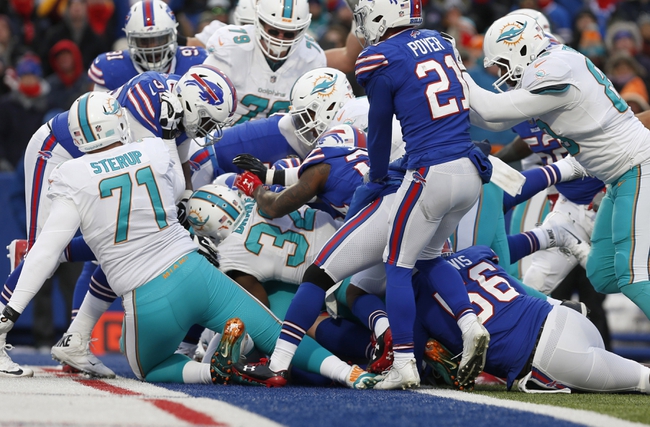 Down at Hard Rock Stadium on Sunday, the Buffalo Bills and the Miami Dolphins will be closing out their NFL seasons in Week 17 from the AFC East.

Buffalo comes in at 8-7 on the year. The Bills had a decent run going with three wins in a four-game stretch, but lost their last game to New England. In that one, Bills QB Tyrod Taylor threw for 281 yards on 21-of-38 passing.

Taylor has put up 2595 yards this year with 13 TDs and four picks, and LeSean McCoy is the leading Buffalo rusher on 1128 yards and six scores. Tops in receiving for Buffalo is Charles Clay with 494 yards and two touchdowns from 43 grabs.

Over on the Miami side, they’re 6-9 this season. The Dolphins have lost their last two games, falling to Buffalo and Kansas City in that time. In the KC game, Miami QB Jay Cutler put up 286 yards with one TD.

Cutler is sitting on 2660 yards with 19 TDs and 14 INTs this year, while Kenyan Drake is the leading Miami rusher with his 569 yards and three touchdowns. Jarvis Landry tops out the Miami receivers with 895 yards and eight scores from 103 catches.

Buffalo has had the sincere misfortune of running into New England during two of the last four games; otherwise they might still have a playoff shot. As for Miami, they’ve been doomed by injuries and bad defense this year and have looked pretty bad since Week 7 or so. There’s not much to like about this game from a competition standpoint, so it’s probably one to stay away from. That said I like Buffalo to manage a cover here; the line’s not awful.