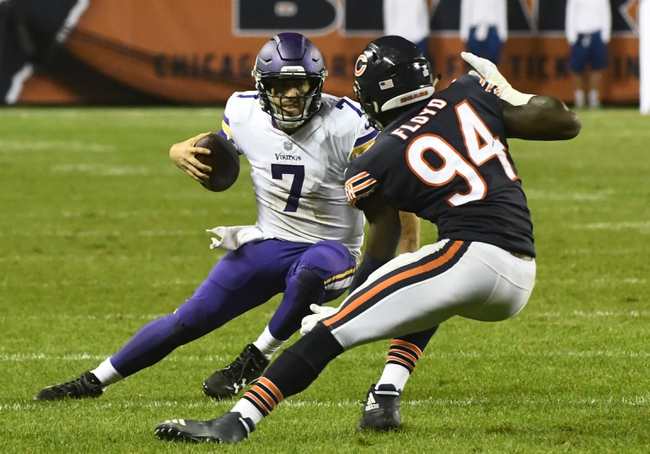 Coming up from US Bank Stadium on Sunday, we’ve got Week 17 NFL action in the NFC North between the Chicago Bears and the Minnesota Vikings.

The Bears enter this game at 5-10 on the year. Chicago has won two of their last three games, beating the Bengals and the Browns. In that Cleveland game, Chicago QB Mitch Trubisky put up 193 yards on 14-of-23 passing.

Trubisky has logged 2015 yards, seven TDs and seven picks on the season so far, while Jordan Howard is the Bears’ top rusher with 1113 yards and nine scores. Kendall Wright is tops in the Chicago receiving corps with 585 yards and one TD form 54 catches.

Minnesota enters this game at 12-3 overall. Since losing to the Panthers on December 10, the Vikings have beaten the Bengals and the Packers. In that Packers game, Vikings QB Case Keenum logged 139 yards and one TD.

Keenum is sitting on 3358 yards with 21 TDs and seven picks overall, with his top target being Adam Thielen with 1215 yards and four scores to lead the Vikings receivers. Tops in rushing is Latavius Murray, who leads Minnesota on 731 yards and six TDs.

The Vikings have something to play for in this game. If Minnesota wins, they’ll secure the No. 2 seed in the NFC and clinch a first-round bye in the playoffs. For that scenario against a flailing Bears team thinking about offseason golf, I don’t think the line is too bad here. I’ll take the Vikings to cover.