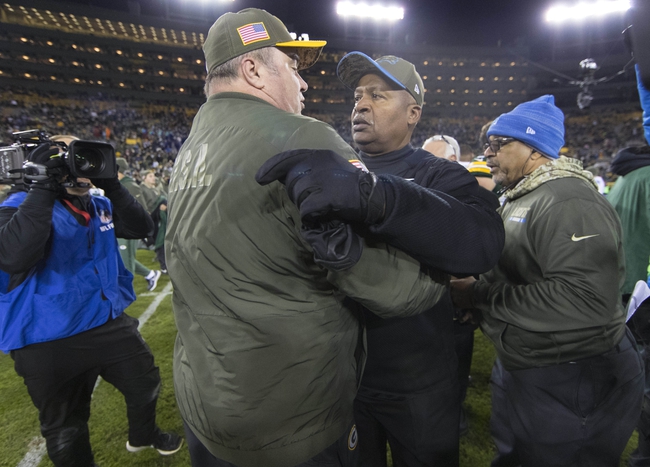 The Detroit Lions have a chance to finish the year with a winning record for the first time in back-to-back seasons since 1999-2000. The Detroit Lions have lost four of their last six home games. Matthew Stafford is completing 65.5 percent of his passes for 4,123 yards, 26 touchdowns and 10 interceptions. Stafford has two or more touchdown passes in five of his last eight games. Marvin Jones Jr. and Golden Tate have combined for 1,918 receiving yards and 12 touchdowns while Eric Ebron has 52 receptions. The Detroit Lions ground game is averaging 78 yards per contest, and Ameer Abdullah leads the way with 534 yards and three touchdowns. Defensively, Detroit is allowing 24.3 points and 362.4 yards per game. Tahir Whitehead leads the Detroit Lions with 104 tackles, Ezekiel Ansah has nine sacks and Darius Slay has seven interceptions.

I'd love an explanation as to why the Lions are this big of a favorite. Yes, Detroit beat up Green Bay in early November, but that's when Hundley was just getting his feet wet with this offense, he's a more confident and effective quarterback right now. The Lions have had very little success at home this season and are fresh off losing outright to the Cincinnati Bengals despite being a 3.5 point favorite. That loss removed any shot of the Lions making the playoffs and it upset the playoffs so much that very few stayed around for the media. I doubt anybody on the Lions will find the motivation to get up for this meaningless game. A free touchdown plus the hook seems like the play here, especially when you consider five of the last seven Packers' games have been decided by one score.