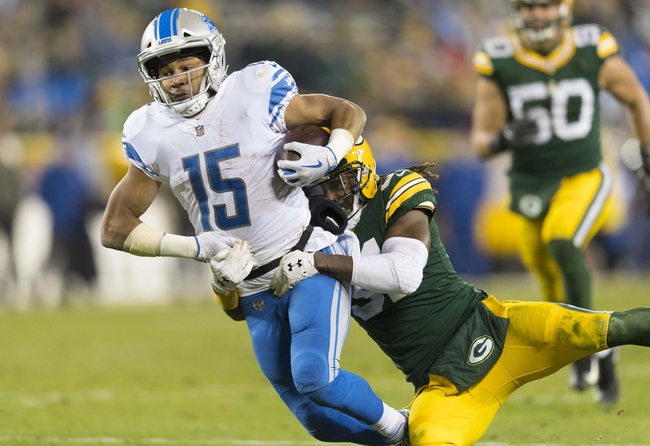 Up at Ford Field on Sunday, we’ve got Week 17 NFL action from the NFC North as the Green Bay Packers visit the Detroit Lions.

Green Bay enters this game at 7-8 overall. The Packers have lost their last two games, falling to Carolina and Minnesota. In that Vikings game, Green Bay QB Brett Hundley threw for 130 yards and two INTs.

Hundley currently has 1664 yards with eight TDs and 10 picks, with Davante Adams being the main beneficiary, leading the Packers on 885 yards and 10 scores. Jamaal Williams is the top rusher for Green Bay on 474 yards and four TDs.

Over on the Detroit side, they’re sitting at 8-7 this year. The Lions had two wins going against Tampa and Chicago but lost to the lowly Bengals their last time out. Detroit QB Matthew Stafford put up 203 yards with a TD and an INT in that one.

Stafford is sitting on 4123 yards with 26 TDs and 10 INTs this year, and Ameer Abdullah is the top Lions rusher with 534 yards and three scores. Marvin Jones heads up the Detroit receiving corps with 1020 yards and eight TDs.

In a weird move, the Packers recently put Aaron Rodgers back on IR, so they’re effectively cutting their losses in a meaningless game. As for Detroit, they’ve got nothing to play for either aside from sweeping the Pack in the season series. All things considered, I like the Lions to bag a cover here.