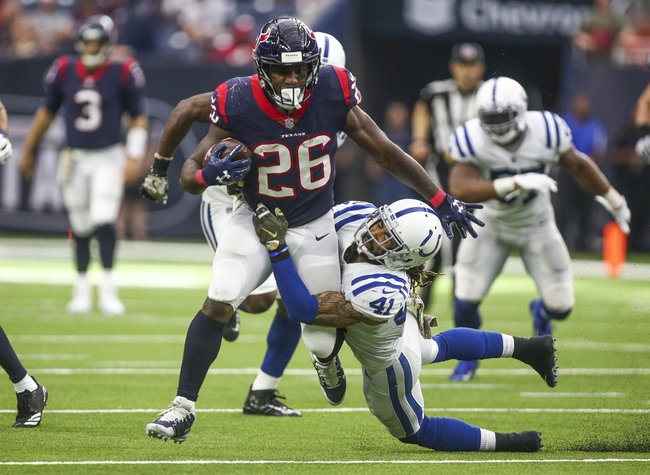 Headed our way on Sunday from Lucas Oil Stadium, the Houston Texans and the Indianapolis Colts will be finishing up their NFL seasons in Week 17.

Houston comes into this game with a 4-11 record this year. The Texans are skidding right now, losing their last five games straight and eight of their last nine. Houston’s most recent loss came Monday to the Steelers 34-6.

In that Steelers game, Texans QB TJ Yates threw for just 83 yards with one TD and one INT on 7-of-16 passing. That said, Alfred Blue had a nice rush day on 16 carries for 108 yards. Deandre Hopkins was the only Texans receiver with more than 10 yards, bagging 65 yards and one TD on four catches.

Over on the Colts’ side, they’re 3-12 this season. Indianapolis has lost their last six games straight, falling to Baltimore most recently on Saturday. In that one, Indy QB Jacoby Brissett logged 215 yards and a TD.

This season, Brissett has put up 2984 yards with 12 TDs and seven INTs, and Frank Gore is the leading Colts rusher on 861 yards and three scores. TY Hilton tops out the Indianapolis receiving corps with 952 yards and four touchdowns.

There’s not a whole lot to like about this game; realistically the only thing it will affect is next year’s draft position. Indianapolis has been pretty bad recently, especially on offense. The Colts have come up with no more than 17 points in any of their last six games. All of that said, Houston has just looked awful recently. I’m going to go with the Colts to win here.