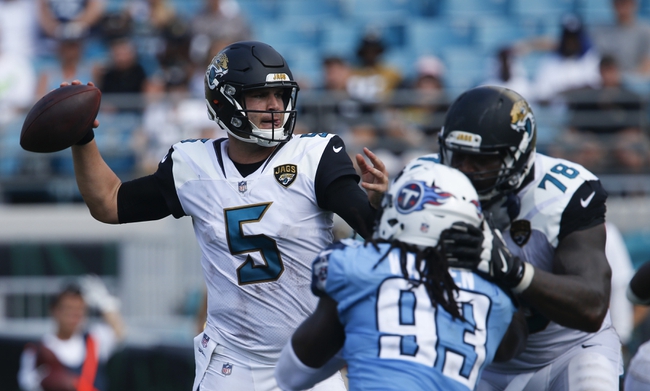 The Jacksonville Jaguars and the Tennessee Titans close out their respective 2017 NFL regular season schedules with a division matchup on New Year’s Eve.

The Jacksonville Jaguars will look forward to their first playoff game since 2007 despite a 44-33 loss to San Francisco in their last outing. Blake Bortles threw for 382 yards, 2 touchdowns and 3 interceptions on 32 of 50 passing, while Leonard Fournette used for 48 yards and a touchdown in addition to 13 yards and a touchdown from T.J. Yeldon. Keelan Cole led the team with 6 catches for 108 yards, while Dede Westbrook added 74 yards and the aforementioned Yeldon caught a team-high 7 balls. James O’Shaughnessy added 5 catches for 39 yards and a touchdown, while Jaelen Strong added 3 catches and a TD grab of his own. Defensively, the Jags combined for a sack and an interception while giving up 369 yards of total offence to the Niners in the game.

The Tennessee Titans enter week 17 in possession of the 2nd wild card spot, sitting at 8-7 this season following a 27-23 loss to the Rams, pushing their losing streak to 3 games. Marcus Mariota threw for 275 yards and an interception on 22 of 39 passing. DeMarco Murray led the team with 48 rushing yards and a touchdown, while Corey Davis led Tennessee with 91 receiving yards. Davis tied for the team lead with 6 catches, as Eric Decker also hauled in 6 passes for 73 yards in the losing effort. On defense, Jurrell Casey forced a fumble that Wesley Woodyard returned 4 yards for a touchdown as the lone highlight as Tennessee allowed 402 yards of total offense in the losing effort for the Titans.

The Titans may come into this one in a wild card position, but the way I see it, is there’s always one team that blows it in the final week, and for me, that team is Tennessee. Sure, the Titans last couple of losses came against a very good Rams squad, and a 49ers team that’s found new life under Jimmy Garoppolo, but this losing streak started with a bad loss to the Cardinals. Jacksonville has shown no signs of resting anyone as all they’re playing for right now is playoff position. With that said, I’d keep an eye on any key Jaguars resting, but if everyone is going, I think Jacksonville wins this game outright, but I’ll take the points to be safe.