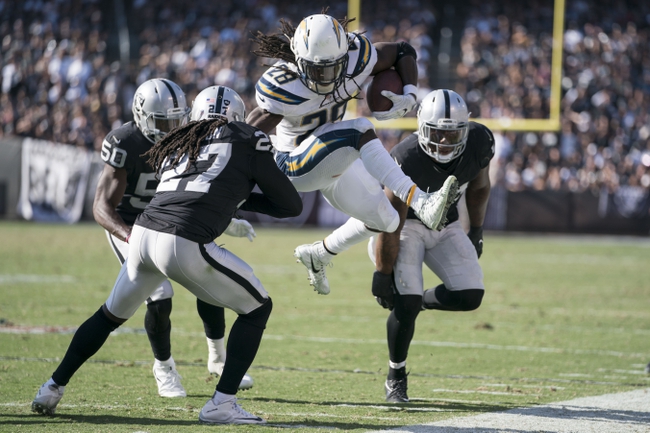 The Oakland Raiders look to snap a three-game losing streak while preventing an AFC West rival from making the playoffs. The Oakland Raiders have lost five of their last six road games. Derek Carr is completing 62.4 percent of his passes for 3,253 yards, 21 touchdowns and 12 interceptions. Carr has one touchdown pass in six of his last eight games. Jared Cook and Michael Crabtree have combined for 1,254 receiving yards and 10 touchdowns while Amari Cooper has 45 receptions. The Oakland Raiders ground game is averaging 96.6 yards per contest, and Marshawn Lynch leads the way with 790 yards and seven touchdowns. Defensively, Oakland is allowing 23.1 points and 349.3 yards per game. Reggie Nelson leads the Oakland Raiders with 82 tackles, Khalil Mack has 10.5 sacks and TJ Carrie has seven pass deflections.

The Oakland Raiders have found creative ways to lose and fail to cover the spread all season long, and it's got to be painful for people who continue to back them each week. Carr is simply not playing at the level we expect, the Oakland defense gets carved up often and this looks like a team that's ready for the season to end. The Los Angeles Chargers have to win to have any chance of making the playoffs and while the numbers aren't pretty against the spread, the Chargers are playing their best ball of the season and have won four straight home games by at least nine points. I'd love to get this number a tad lower to be on the safe side, but either way, the Chargers should win by double digits. The Oakland Raiders have nothing left in the tank.