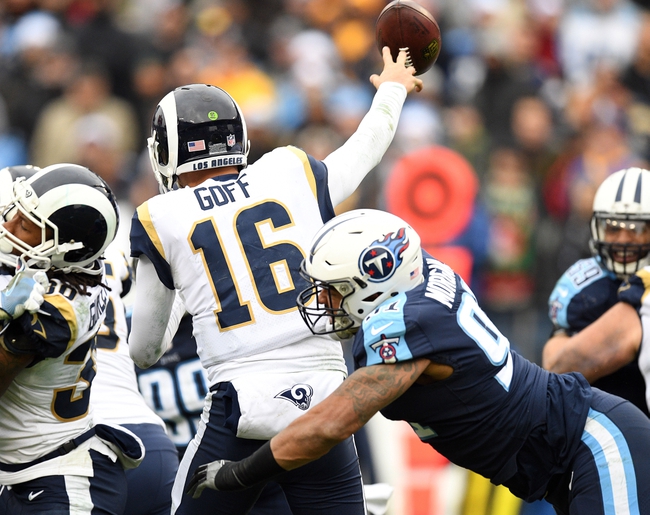 We have a battle on the gridiron in the Golden State, as the San Francisco 49ers take on the Los Angeles Rams in week 17 NFL action.

The San Francisco 49ers will look to finish the season on a high note after improving to 5-10 this season with their 4th straight win following a 44-33 victory over the Jacksonville Jaguars in their last outing. Jimmy Garoppolo threw for 242 yards, a touchdown and an interception on 21 of 30 passing, while also rushing for a 3rd score as well. Matt Breida led the team with 74 rushing yards and a touchdown on 11 carries, while Carlos Hyde chipped in 54 rushing yards and a score with his 21 carries. Kyle Juszczyk led the Niners with 5 catches for 76 yards, while George Kittle and Trent Taylor each logged 3 catches and a touchdown in the winning effort. On defense, the 49ers combined for a sack and 3 interceptions while giving up 472 yards of total offence and a 5 for 13 mark on 3rd down in the win.

The Los Angeles Rams will try to finish the year on a high note after clinching their first division title since 2003, climbing to 11-4 this season following a 27-23 win over Tennessee in their last outing. Jared Goff threw for 301 yards and 4 touchdowns on 22 of 38 passing, while Todd Gurley II raked up 118 rushing yards on 23 carries. Gurley II also led the Rams with 10 catches for 158 yards and 2 receiving touchdowns, while Cooper Kupp added 4 catches for 65 yards and a touchdown and Sammy Watkins chipped in 3 catches of his own for 30 yards and a touchdown. On defence, Cory Littleton recorded a sack and an interception and Aaron Donald forced a fumble, while L.A. gave up 366 yards of total offence and a 3 for 12 mark on 3rd down to the Titans in the win.

I’ve been on the 49ers train for the last couple of weeks, and I’m going to ride it to finish out the year. Remember when these two met early in the year, and the Niners lost by just 2 points and hung up 39 on this same Rams team? Yeah. The Rams are a good team that could be a dark horse to make the NFC title game, but as good as the offense has been, L.A. just isn’t blowing teams out and are letting teams hang around in games. I have said it before and I’ll say it again, the Niners are a different team with Garoppolo under centre, who by the way is also 6-0 in his career as a starter. I’m going to take the points with San Fran here, and I’ll also sprinkle a little bit on the money line as I see the Niners finishing the year with a road win.