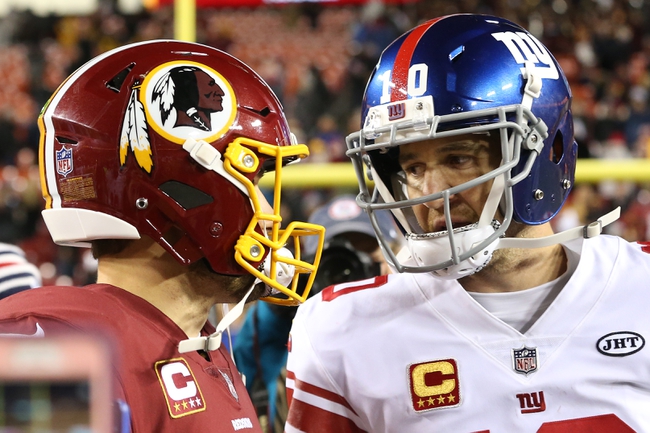 We’ve got an NFC East matchup coming in Week 17 NFL action as the Washington Redskins visit the New York Giants out at MetLife.

Washington comes into this game at 7-8 on the season. The Redskins have won their last two games, however, beating the Cardinals and Broncos. In that Denver game, Redskins QB Kirk Cousins put up 299 yards and three TDs.

This season, Cousins has logged 3935 yards, 27 TDs and 10 INTs, while Samaje Perine is the top Redskins rusher on 600 yards and one score. Jamison Crowder tops out the Washington receiving corps with 764 yards and three TDs.

Over on the Giants side, they’re currently 2-13 this season. New York has lost their last five games straight, including Sunday’s game versus the Cardinals. In that one, New York QB Eli Manning put up 263 yards with two picks.

Manning is sitting on 3336 yards with 18 TDs and 12 INTs, and Orleans Darkwa has 597 yards with four TDs to lead the Giants rushers. Sterling Shepard tops out the NY receivers with 731 yards and two scores.

The Redskins have shown a few flashes this year, but really haven’t been able to put anything together for more than a week. The good news is that the defense has played well over the last couple, allowing just 26 combined points in two games. As for the Giants, they’re just limping to the finish line and will be looking at a high draft pick in 2018. I like the Redskins to take a cover here.