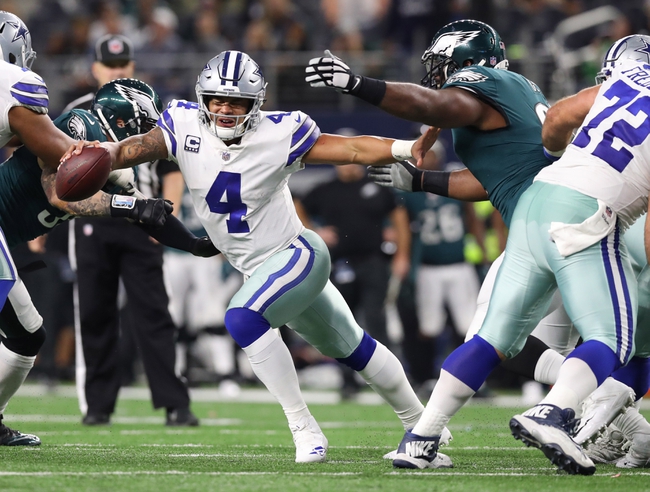 We have an NFC East rivalry matchup to close out the regular season, as the Dallas Cowboys take on the Philadelphia Eagles in week 17 NFL action.

The Dallas Cowboys will look to finish the season above .500 after being eliminated from playoff contention thanks to a 21-12 loss to Seattle in their last outing. Dak Prescott threw for 182 yards and a pair of interceptions on 21 of 34 passing. Ezekiel Elliott rushed for 97 yards on 24 carries in his first game back from his 6 game suspension, while Dez Bryant led the team with 44 receiving yards on 3 catches. Terrence Williams added 4 catches for 43 yards, while Jason Witten caught a team-high 5 passes for 39 yards. On defense, the Cowboys combined for 3 sacks while holding Seattle to just 136 yards of total offense and a 4 for 11 mark on 3rd down in the loss.

The Philadelphia Eagles will just try to finish the season strong after locking up home field thanks to a 19-10 victory over the Oakland Raiders to close out week 16 on Monday Night Football, improving to 13-2 in the process. Nick Files threw for 163 yards, a touchdown and an interception on 19 of 38 passing, while Jay Ajayi added 52 yards on 14 carries to lead Philly in rushing. Ajayi also caught the team’s lone touchdown out of the backfield, while Zach Ertz led the team in receiving with 9 catches for 81 yards and Nelson Agholor added 4 catches for 35 yards in the win. On defense, the Eagles were busy, combining for a sack, 3 interceptions and 3 forced fumbles that were all recovered, including a fumble return for a touchdown for Derek Barnett as time expired. All while holding Oakland to just 274 yards of total offence and a 3 for 13 mark on 3rd down in the win.

Neither of these two teams have anything to play for at this point, as Philly will probably want to rest guys but keep in mind they’ll have another week to do that, so it may be worth getting some reps in for Foles and the rest of the starting group. On the other side, this is still a rivalry game and I think both will want to put their best foot forward to end the year, and since we are getting points at home with the best team in the league, I’ll side with Philadelphia here but this is one game I would definitely leave alone.