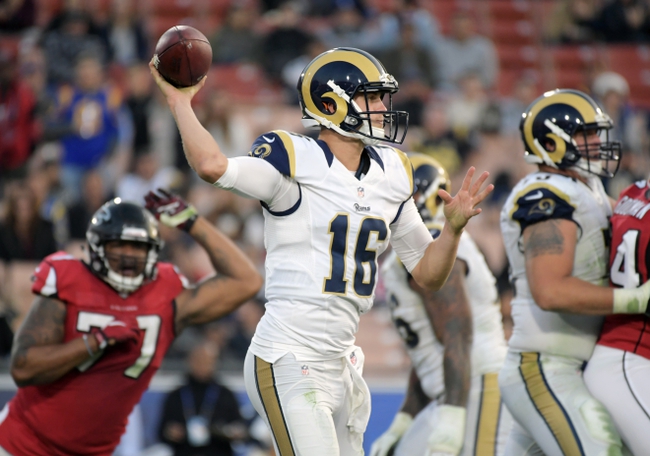 We have an NFC Wild Card matchup on tap Saturday night, as the Atlanta Falcons pay a visit to the Los Angeles Rams in NFL playoff action.

The Atlanta Falcons reached the playoffs in the last week of the season, finishing the year 10-6 and punching their ticket with a Seattle loss to Arizona and a 22-10 win over Carolina that saw Matt Ryan throw for 317 yards and a touchdown on 28 of 45 passing while Devonta Freeman led the team with 85 receiving yards, 9 catches and a touchdown. Julio Jones added 5 catches for 80 yards and Mohamed San added 7 grabs for 71 yards, while the defence recorded 3 interceptions and a pair of sacks. Ryan threw for 4,095 yards, 20 touchdowns and 12 interceptions on 342 of 529 passing, good for a 64.7% completion percentage. Freeman led the team in rushing with 865 yards and 7 touchdowns, while Tevin Coleman added 628 rushing yards and 5 scores. Julio Jones led the team in receiving with 88 catches for 1,444 yards and 3 touchdowns, while Mohamed San added 67 receptions for 703 yards and 5 TDs. The Falcons defensively finished in the top-10 in total yardage against and points allowed per game, with 318.4 yards against per games (9th) and 19.7 points per game against (8th).

The Los Angeles Rams are in the playoffs for the first time since 2004, and it’s all thanks to an 11-5 record that saw the Rams win their first NFC West crown since 2003, the same year that the Rams last had double digits in the win column. Jared Goff had a much better sophomore season than his rookie year, throwing for 3,804 yards, 28 touchdowns and 7 interceptions on 296 of 477 passing, good for a 62.1% completion percentage. Todd Gurley led the team in rushing with 1,305 yards and 13 rushing touchdowns in addition to finishing 2nd on the team in receiving yards with 788 yards on a team-high 64 receptions with 6 touchdowns through the air. Cooper Kupp led the team with 869 receiving yards on 62 catches with 5 touchdowns, while Robert Woods added 781 yards and 5 scores of his own and Sammy Watkins led the team with 8 touchdown grabs in his first season as a Ram. Aaron Donald led the team with 11 sacks this season as part of a defensive unit that allowed just 20.6 points per game, but finished in the bottom half in total yardage against and rushing yardage against, with 339.6 yards of total offence per game (19th) and 122.4 rushing yards per game (28th).

Los Angeles is the dark horse in the NFC in my opinion, as they have the highest scoring offense in the entire league and are pumped about being in the postseason and proving themselves. However, the Falcons have been here many times before and are an experienced group that aren’t afraid of going on the road and getting the job done. Also, let’s not forget that this entire season has been about redemption after blowing that 28-3 lead, something that still haunts the Falcons to this day. This game could go either way, but an experienced Falcons team getting points against a Rams team that’s making their first trip to the postseason in 13 years sounds good to me. Give me the Falcons and the points in this one.