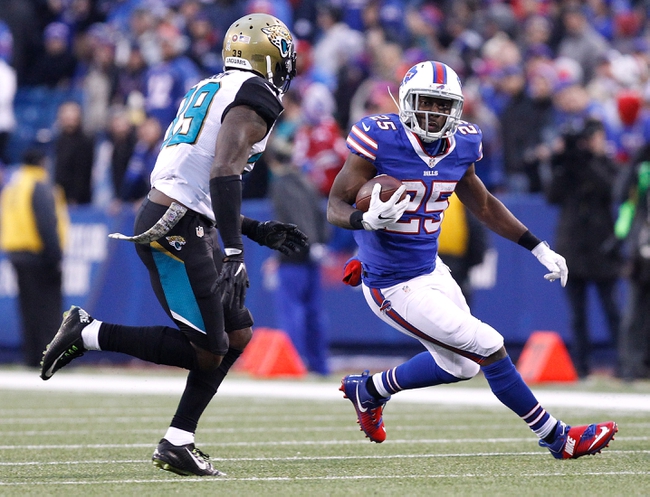 The Buffalo Bills visit the Jacksonville Jaguars in an AFC Wild Card matchup in NFL playoff action on Sunday afternoon.

The Buffalo Bills will be making their first postseason appearance since 1999, ending the longest playoff drought in the 4 major sports, by virtue of their 9-7 regular season record, making it into the postseason on the final day of the year. Tyrod Taylor led Buffalo under center, throwing for just under 2,800 yards with 14 touchdowns and 4 interceptions on 263 of 420 passing, good for a 62.6% completion percentage. LeSean McCoy rushed for 1,138 yards and a team-high 6 rushing touchdowns, while Taylor added 4 rushing scores of his own. Charles Clay led the team with 558 receiving yards, while McCoy caught a team-high 59 passes and Andre Holmes led the team with 3 receiving touchdowns this season. Micah Hyde and Jordan Poyer tied for the team lead on defense, while Jerry Hughes and Shaq Lawson tied for the team-high with 4 sacks apiece. As a team, the Bills’ D gave up 355.1 yards of total offense per game, including 124.6 rushing yards per game, sitting in the bottom quarter of the league in both categories while allowing 22.4 points per game this season.

The Jacksonville Jaguars will be making their first playoff appearance since 2007, with their first AFC South championship and first division title since 1999 thanks to a 10-6 record this year. Blake Bortles threw for 3,687 yards, 21 touchdowns and 13 interceptions on 315 of 523 passing, good for a 60.2% completion percentage. Leonard Fournette led the Jags in rushing with 1,040 yards and 9 touchdowns on the ground, while Keelan Cole led the team with 748 receiving yards. Marqise Lee led the team with 56 catches for 702 yards and 3 touchdowns of his own, while Marcedes lewis added a team-leading 5 touchdown grabs. Calais Campbell finished 2nd in the entire league with 14.5 sacks, while A.J. Bouye added a team-high 6 interceptions as the Jaguars as a whole allowed the 2nd fewest yards of total offense per game with 286.1 per game and the fewest passing yards against per game in the NFL with just 169.9 yards per game. The Jaguars also gave up the 2nd fewest points per game with 16.8 points against per game this season.

You can bet that EverBank Field is going to be rocking with the Jags making their first playoff appearance in a decade. But it’s been even longer for the Bills, and the players know that and will want to put forth a good showing for the fans back home. I do think Jacksonville wins this game and moves on to the divisional round, but I can’t see this game finishing by a margin greater than a touchdown, so I’ll take the points with the Bills here in what should be an entertaining affair.