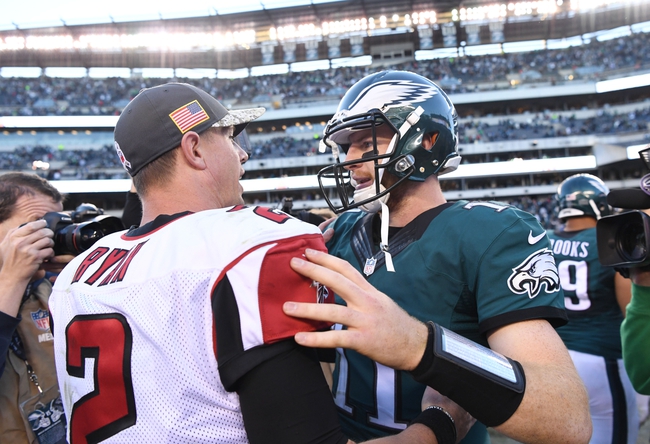 The Atlanta Falcons are coming off a wild card win over the Los Angeles Rams and hope to make back-to-back NFC Championship appearances. The Atlanta Falcons have won four of their last six road games. Matt Ryan is completing 64.7 percent of his passes for 4,095 yards, 20 touchdowns and 12 interceptions. Ryan has one or less touchdown passes in each of his last seven games. Julio Jones and Mohamed Sanu have combined for 2,147 receiving yards and eight touchdowns while Austin Hooper has 49 receptions. The Atlanta Falcons ground game is averaging 115.4 yards per contest, and Devonta Freeman leads the way with 865 yards and seven touchdowns. Defensively, Atlanta is allowing 19.7 points and 318.4 yards per game. Deion Jones leads the Atlanta Falcons with 138 tackles, Adrian Clayborn has 9.5 sacks and Robert Alford has 20 pass deflections.

I'm actually surprised that the Philadelphia Eagles are an underdog in this game. It's actually the first time the No. 1 seed is an underdog in its first playoff game. I understand that the Eagles aren't the same without Carson Wentz, and Foles has been a career backup for a reason. However, the two things you need to have in order to have success in the playoffs, the Eagles have; running game and defense. The Eagles had the third most rushing yards of any team in the league and their defense allowed the fourth fewest total yards while creating 31 turnovers, which was also fourth in the NFL. The Eagles are still a really good football team, and that's without throwing in the home crowd and the rest factor, which also includes a long trip back home for the Falcons from the west coast. We've seen a lot of traveling take its toll on teams in the past, and that's a lot of miles in one week. I also remain a little iffy on the Falcons, as they've been hit or miss all season long and didn't exactly open the game up against the Rams last week despite the Rams doing little offensively. I really like the Eagles in this spot, and while getting free points is always nice, I'll be on the ML as well in this one.