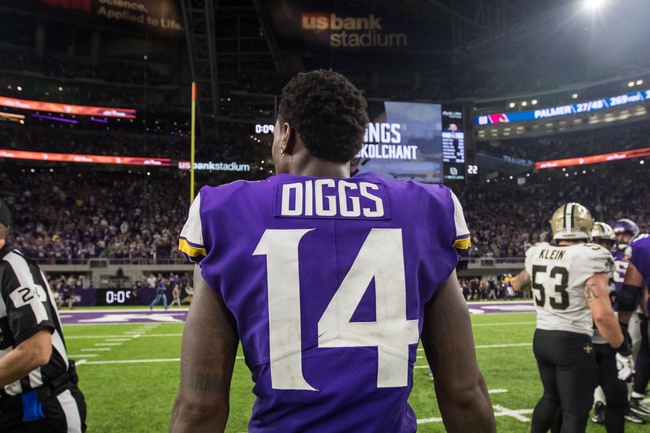 We have some NFC divisional playoff action on tap Sunday afternoon, as the New Orleans Saints face off against the Minnesota Vikings in an NFL matchup.

The New Orleans Saints will look to advance to the NFC championship game after emerging victorious in the Wild-card round, taking down Carolina by a final score of 31-26. Drew Bree’s threw for 376 yards, 2 touchdowns and an interception on 23 of 33 passing, while Alvin Kamara led the team in rushing with 23 yards and a touchdown on 10 carries. Mark Ingram added 9 carries for 22 yards, while Zach Line chipped in a rushing score of his own in the win. Michael Thomas led the team with 8 catches for 131 yards, while Ted Ginn Jr. added 4 catches for 115 yards and a touchdown along with 3 catches for 49 yards and a TD from Josh Hill. The Saints’ defense combined for 4 sacks while giving up 413 yards of total offense to the Panthers in the win.

The Minnesota Vikings got their bye to the divisional round, finishing 13-3 to win the division with their best record since 1998, winning 3 straight and 11 of 12 down the stretch. Case Keenum won the starting QB job, throwing for 3,547 yards on 325 of 481 passing, good for a 67.6% completion percentage with 22 touchdowns and 7 interceptions. Latavius Murray led the Nikes in rushing with 842 yards and 8 touchdowns, while Jerick McKinnon helped provide a nice 1-2 punch with 570 rushing yards and 3 touchdowns. Adam Thielen led the team with 91 catches for 1,276 yards along with 4 touchdowns, while Stefon Diggs and Kyle Rudolph each added 8 touchdowns. Everson Griffen led the team with 13 sacks and Harrison Smith added 5 interceptions to a defensive unit that finished tops in the league in total yardage and points against per game with 275.9 yards of total offense and 15.8 points per game against this season.

This has the potential to be the game of the weekend as you have one of the best offenses in the league going against the top defensive unit in the NFL. The favorite has had the bulk of the success in this matchup, including the Vikings winning the matchup between these two in week 1. Minnesota has had a ton of success at home, but this Saints group is experienced in these kinds of situations, and to be honest, I’d rather have Drew Brees than Case Keenum in a playoff scenario, so I’ll take the free points with the Saints here.