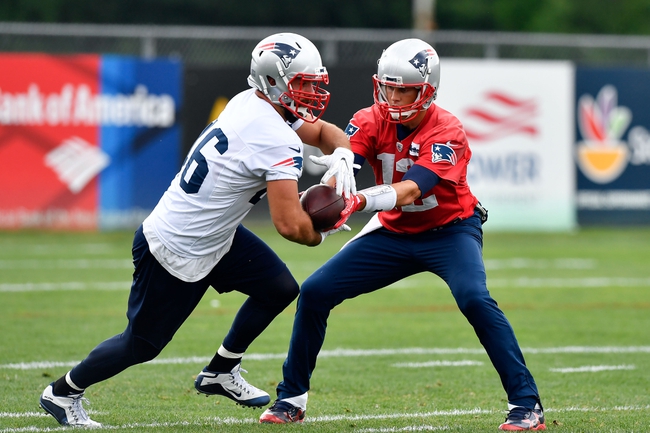 The New England Patriots haven’t had a single-digit winning season since 2002 and have played in three of the last four Super Bowls. This type of consistent success is the reason why the Patriots are the favorites to win the Super Bowl again this season.

Honestly, I’m not running to the ticket counter to bet the Patriots on any future bets.

Tom Brady will be 41 years old a day after the first NFL preseason game. Many will say age doesn’t matter given just how dominant Brady has been over the last decade and the fact he topped 4,500 yards just last year, but there’s not a long list of quarterbacks who are shredding the league at this age. Father time is still undefeated, and it only takes one hit or awkward fall for things to get spooky in New England. People forget that Peyton Manning led the league in touchdown passes in 2013 and started just 25 more games before retiring. The decline happens quickly, and I’m willing to bet you see some of that this season.

The Patriots also have a lack of offensive weapons around Brady, as Brandin Cooks is now with the Los Angeles Rams, Danny Amendola is with the Miami Dolphins and Julian Edelman is suspended for the first four games. New England’s leading rusher in Dion Lewis is in Tennessee, which makes Georgia rookie Sony Michel the likely starting option for this offense. Star tight end Rob Gronkowski can never stay healthy and you have to question just how motivated he is to play for this franchise with him in constant trade rumors. There’s also two new starting offensive linemen in Isaiah Wynn and Trent Brown.

There’s a lot of turnover on this Patriots offense, and honestly, it’s really not that talented.

The Patriots do return their top-five tacklers from last season, but losing a pair of cornerbacks in Malcolm Butler and Johnson Bademosi doesn’t help a secondary that was ranked 30th in the NFL in passing yards allowed. Only the New York Giants and Tampa Bay Buccaneers allowed more passing yards (4020) than the Patriots last season. The addition of Adrian Clayborn certainly boosts the pass rush and takes pressure off a guy like Trey Flowers on the other side, but the Patriots defense isn’t a group that’s scaring anybody, especially after what we saw last season and throughout the playoffs.

The Pats also no longer have Matt Patricia, who was the defensive coordinator of this team since 2012. You can question if the change was needed after how last season played out, but he is a respected defensive mind and his voice will be missed in that locker room.

There’s also the outside noise with this franchise that includes Bill Belichick being upset with Robert Kraft following the Jimmy Garoppolo trade, Brady threatening to retire if Gronk is traded, and, well, Gronkowski possibly being traded.

From the old quarterback, lack of offensive playmakers, coaches moving and lots of rumors from a franchise that’s usually tight lipped, I just don’t trust any of it. I’ll be looking to fade the Patriots often this season.

Patriots 11 season wins: Over -135 / Under +115 (Not only do the Pats have questions, but they play at Pittsburgh, vs. Green Bay, vs. Minnesota, vs. Houston, at Jacksonville, vs. Kansas City, at Tennessee, and the Dolphins usually beat them in Miami. Not easy)

Patriots make playoffs: Yes -1600 / No +895 (If my theory of Brady falling off a cliff this season comes true, would it really be shocking if the Pats miss the postseason? This is strictly a value bet, by the way. Of course, the Pats should make the playoffs.)

Patriots Win Super Bowl: +650 If it wasn’t clear enough, the Patriots won’t be one of the teams I’ll be locking a Super Bowl bet on this season. I’m just not sold on this club right now.