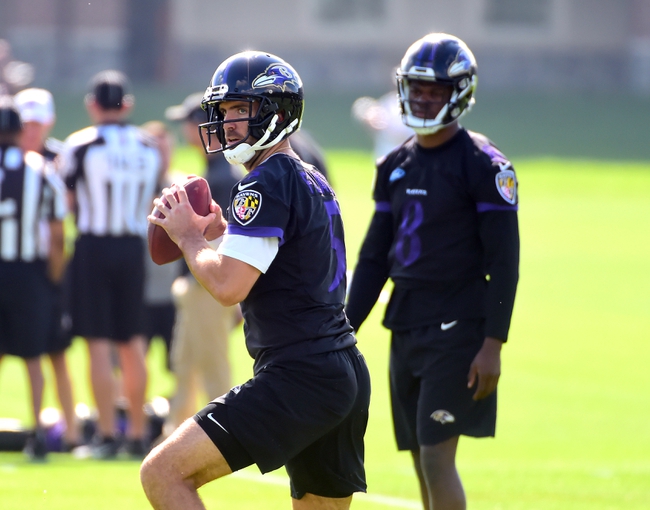 So, while this is a team motivated for a turnaround, what do the Ravens look like betting wise entering the 2018-19 NFL season?

The Ravens finished 8-7-1 last season ATS and are a combined 20-25-3 ATS the last three years, so you haven’t made much money betting on Baltimore recently. There’s very little covering trends that make the Ravens a worthwhile bet over the course of the season, but they are 4-1-1 ATS in their last six games as a road underdog.

As for the season itself, a lot comes down to how effective Joe Flacco is going to be at quarterback. Flacco hasn’t been great since winning a Super Bowl, and he’s coming off a season in which he had 18 touchdown passes and 13 interceptions. Maybe the addition of Lamar Jackson inspires him to play better, or maybe Jackson eventually takes over and gives the Ravens offense a much needed shot in the arm. Regardless, the success of the Ravens this season will come down to the play at QB.

A combination of Alex Collins and Javorius Allen at running back has proven to be one of the more underrated 1-2 punches in the league, and they combined for more than 1,500 yards and 10 touchdowns last season. The Ravens needed new wide receivers, so they added Michael Crabtree, John Brown and Willie Snead, guys who aren’t exactly game changers, but they’re reliable options who can move the chains and are an upgrade over past players. The offensive skill positions are better in Baltimore than they’ve been in years, it simply comes down to whoever is at quarterback to make the throws. While Justin Tucker is a great kicker and all, the Ravens need to cash more in the end zone in order to break this playoff drought.

Defensively, the Ravens have formed an identity and consistency over the years to suggest they’ll be just fine. Last year, the Ravens were sixth in points and 12th in total yards allowed. The Ravens were tied with the Chicago Bears for fifth best in the NFL last season with just 18 passing touchdowns allowed.

Those numbers should continue this season with majority of the key players back, including one of the top linebackers in the league C.J. Mosley, an elite pass rusher in Terrell Suggs and a playmaking safety in Eric Weddle. It’s also not going to hurt having a healthy Jimmy Smith at cornerback this season, as he makes his way back from an achilles injury. The Ravens defense is an experienced group that plays tough, together and seems to come through with plays in the clutch. Just a typical hard nosed AFC South team that’s not going to budge much on that side of the ball.

I’m not sure the Ravens did enough during the offseason to suggest this club went from being outside of the playoff race to dark horse Super Bowl contenders, but this is a better team than a year ago. The wide receiver additions should make the offense better and the defense always gives this club a chance to win.

With that said, there’s going to be value finding the Ravens in an underdog role. As for favorite spots, I’m not looking to lay big numbers with a team that’s not overly stocked talent wise and has been subpar in covering chalk. Betting on any future bets with the Ravens simply comes down to how much you trust Flacco to be an above-average quarterback. He’ll have to be the difference for Baltimore to compete for a division talent or make any noise come playoff time. Based on his last several seasons, I can’t say I’m onboard.

Baltimore Ravens win AFC North: Yes +430 / No -560 (I’m looking at this bet simply because the Ravens are the second best team in this division on paper and it takes just one hit on old Big Ben to open things up.)

Baltimore Ravens make playoffs: Yes +150 / No -180 (The Ravens won nine games last year with a below average QB and no receivers. Improved weapons should be good for one more win and a playoff spot.)

Baltimore Ravens Season Win Total 8: Over -130 / Under +110 (Again, the Ravens won nine games last year. The Ravens have had less than eight wins just once since 2008.)

Baltimore Ravens Super Bowl Odds: +5500 (The Ravens won’t be a team I’m looking to back Super Bowl wise, but you can clearly make money on this club with other future bets at very good prices.)