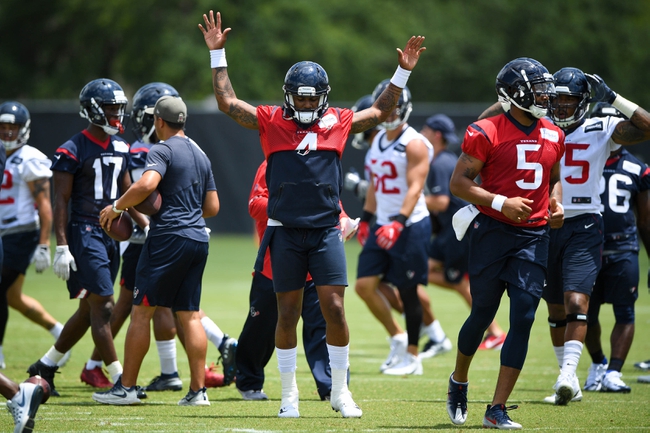 The Houston Texans won just four games last season and missed out on a chance to make the playoffs for a franchise record third straight year, but obviously a lot of that had to do with injuries. Most teams will have a hard time winning when they lose their starting quarterback and many key defensive players. This is a new season, new health and redemption should be the word on many players’ minds.

So, how much should you like the Texans this season?

Deshaun Watson showed enough last year before his ACL injury that he’s the real deal and a guy who can lead the Texans to big things. He’s been cleared for individual drills in OTAs and there shouldn’t be anything holding him back come training camp. Just how good was the rookie out of Clemson in limited playing time? In five games Watson had 29 or more pass attempts, he combined for 1,472 yards and 18 touchdowns, which makes for a 16-game average of 4,710 passing yards and 58 touchdowns. That’s MVP type stuff for the young quarterback.

Lamar Miller and D'Onta Foreman formed a decent enough running back combination and are capable of better things as they mature into their roles. DeAndre Hopkins is one of the top receivers in the league and Will Fuller V is coming off a seven touchdown year despite missing a chunk of the season. The Texans offensive line should also be much more improved thanks to the additions of Zach Fulton, Senio Kelemete and Seantrel Henderson. Assuming everybody stays healthy this year, particularly Watson, the Texans could have a top-10 offense in the league.

Defensively, the Texans allowed the most points of any team last year, but those numbers will improve with the return of J.J. Watt, one of the best players in the game regardless of position. Benardrick McKinney and Jadeveon Clowney are two of the better young linebackers in the game and hold down the second unit, while Tyrann Mathieu and Aaron Colvin are going to drastically improve the secondary. Let’s not forget that back in 2016, the Texans had one of the top defenses, allowing the fewest yards and producing 11 interceptions and 31 sacks.

I’m not a big fan of coach Bill O'Brien, as he makes questionable decisions often and rarely has his team ready for big games. However, assuming the Texans don’t get blown up by the injury bug for a second year in a row, this squad has sleeper Super Bowl potential. I’m high on this team and probably make them my top future bet when it comes to dark horse picks.

I’m buying all the stock I can in these Texans.

Houston Texans win AFC South: Yes +200 / No -240 (The Texans are the most balanced team in the division and have the best quarterback. This is one of the better division bets you can make. You’re welcome.)

Houston Texans make playoffs: Yes -135 / No -110 (If I have the Texans as a Super Bowl contender, they’re obviously making the playoffs. Stay healthy, and this team rolls into the playoffs.)

HOU regular season wins over 8.5: Over -155 / Under +135 (The Texans have won at least nine games in five of the last seven seasons, and last year was a fluke due to half their team being banged up. Assuming this is possibly the most talented team in franchise history, over the total isn’t really in question.)

Houston Texans Super Bowl Odds: +2000 If you haven’t read any of the article by now, the Texans are my top sleeper Super Bowl pick. I will have a future bet on this team to win the whole thing. If you’re selling Houston Texans stock, I’m buying.