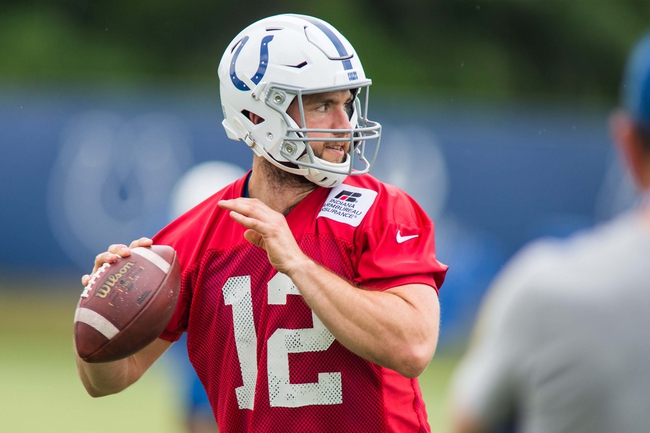 The Indianapolis Colts bring in former Philadelphia Eagles offensive coordinator Frank Reich to be head coach, and they hope everything goes smoothly with quarterback Andrew Luck. We haven’t seen the Colts star quarterback on the field since January of 2017, as he continues to deal with shoulder issues and pain whenever he tries to attempt a comeback. The good news for the Colts is that many of those issues haven’t bothered him much lately and there’s increased optimism that he’ll be ready at the start of the season.

Luck has to be Luck if this is going to be a successful season, and the Colts prevent a fourth year of no playoffs for the first time since 1991-94. It’s really that simple. We can breakdown past betting trends and how the Colts were 30th in points scored, 31st in yards produced, and the defense being 30th in points allowed and yards allowed last season. It’s been awful. However, a lot of that changes when Luck is healthy and being the MVP caliber quarterback he’s capable of being.

In Luck’s last 38 games, he has over 10,800 passing yards, a completion percentage of 61.1 percent and 86 touchdowns. He’s a difference maker and gives the Colts a serious chance to win the AFC South when healthy. Show me he’s ready to go, and I’m backing Indianapolis to do some things this season. If not, expect a lot of the things you saw a year ago.

As for the rest of the team, T.Y. Hilton is still a game changer at wide receiver and will make everyone around him better. Bringing in tight end Eric Ebron was a massive upgrade for the Colts and gives them a big body who can be the security blanket over the middle. The Colts hope draft picks Quenton Nelson and Braden Smith can improve a below average offensive line, and Ryan Grant is coming off his best season with the Washington Redskins and should be ready for an expanded role on his new team.

The depth isn’t pretty and running back is an issue, but there’s enough for the Colts offense to succeed if Luck is ready to go.

The Colts didn’t make a ton of changes defensively other than bringing in linebacker Najee Goode and defensive lineman Denico Autry. This unit was awful last season, as only the New York Giants and Tampa Bay Buccaneers allowed more total yards. There was some progress made late in the year, as the Colts allowed 20 or less points in five of their last eight games. There is some youth to be excited about, particularly in the secondary with Quincy Wilson and Malik Hooker, but overall, this Colts defense has a ways to go before anybody can get onboard.

For me, the Colts don’t exist until Luck is on the field and healthy. There’s not enough talent for the Colts to be anything without a reliable quarterback, and while Jacoby Brissett showed flashes last season, he’s nothing more than a serviceable backup.

Indianapolis Colts win AFC South: Yes +550 / No -800 (This division is much tougher than past years, and with Luck or not, the Colts don’t have the balance as other teams.)

Indianapolis Colts make playoffs: Yes +305 / No -395 (A wild card spot isn’t out of the question with a healthy quarterback. Yes, there’s issues with the defense and overall depth, but we know how far star quarterbacks can carry a subpar roster. Healthy Luck makes the Colts a possible playoff team.)

Colts Super Bowl Odds: +7500 The Colts are a borderline playoff team if everything goes right. Even with Luck playing like he did in 2014, it’s not enough to carry this team far. The offensive weapons are limited, there’s no reliable running back right now and the defense got torched left and right a year ago. You can’t win in this league trading points. There’s going to be value with the Colts at times this season, but I’m not putting a Super Bowl bet on this team, Luck or not.

The pick in this article is the opinion of the writer, not a Sports Chat Place site consensus.
Previous Pick
NFL Odds: Cleveland Browns 2018 NFL Betting Preview
Next Pick
NFL Odds: Betting Washington Redskins Derrius Guice To Win Offensive Rookie of the Year