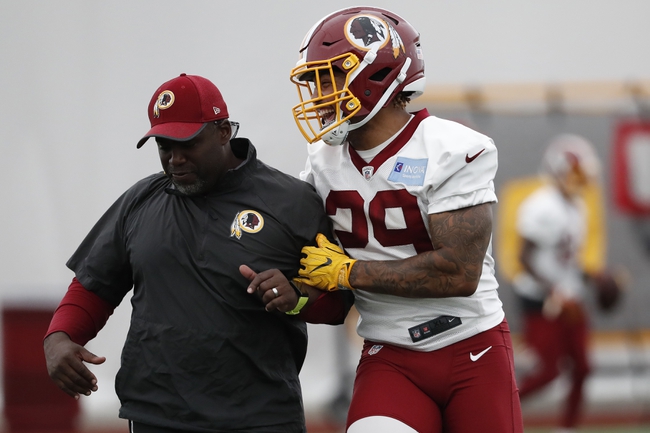 Let me start this article off by saying there’s not enough offensive rookies in the NFL to make a case to win Rookie of the Year. I usually give out multiple options in these type of articles and make a case for plenty of dark horses. However, all of the quarterbacks are going to spend time on the bench, Calvin Ridley is buried behind two quality receivers in Atlanta, Sony Michel will be overlooked by Tom Brady and Rashaad Penny might not even lead Seattle in rushing with Russell Wilson at quarterback.

Everyone and their brother has handed New York Giants running back Saquon Barkley the hardware, and for good reason. He’s extremely talented, plays in a big market and will have running lanes with the defense focused on their deep receiving corps. But with future bets, I don’t want my money tied up with +140 odds. The juice isn’t worth the squeeze. A $200 bet would reward me $280 profit, and that’s not a bet I’m excited about when I have to wait until January to receive it.

Derrius Guice at +1600 odds to win rookie of the year is a bet I can get behind.

Unlike most players in this draft class, Guice is going to be the starter in Washington, as Chris Thompson and Samaje Perine had their chances to prove themselves and couldn’t do it. The Redskins finished 27th in the league last season with just 1,448 rushing yards and 29th with a 3.6 yards per carry average. While young, Guice will see enough touches to be a factor for such an award.

At LSU, Guice finished his career with over 3,000 rushing yards, a 6.5 yard per carry average and 29 touchdowns. Guice improved his receiving ability as a junior with 18 receptions and showed the ability to return kicks his first two seasons. Guice is a tough nosed runner who doesn’t go down easily and has above-average speed in the open field. Guice runs angry, and some would argue he was the best running back in Baton Rouge when Leonard Fournette shared the field.

The Redskins also have an offensive coordinator in Matt Cavanaugh who wants to run the football. In four of his last six years running an offense in the NFL, Cavanaugh has finished eighth or better in league rushing attempts, including leading the league in rushing attempts with the Baltimore Ravens in 2003. Even during his Pittsburgh Panthers days, Cavanaugh ran the hell out of LeSean McCoy and LaRod Stephens-Howling, giving the current Buffalo Bills star a combined 584 carries in two years. The Redskins abandoned the run often last year due to a lack of production and being down on the scoreboard, not because they don’t want to be a run-first offense.

Let’s also not forget that Alex Smith is now the quarterback of the Redskins, a guy who has spent his whole career as a game manager and somebody who enjoys long drives. Smith is 23rd among active quarterbacks with an average of 29.6 pass attempts per game. He’s not going to be eager to throw the ball 40 times a game, and he was more than willing to let a rookie running back shine last year in Kansas City in Kareem Hunt, who made a strong case for rookie of the year himself.

So, while everybody is drooling over Barkley and his potential in New York, I’m giving strong consideration to a running back within the same division.

Guice is worth an offensive rookie of the year bet.