NFL Odds: NFL Betting Odds for the AFC East for 2018 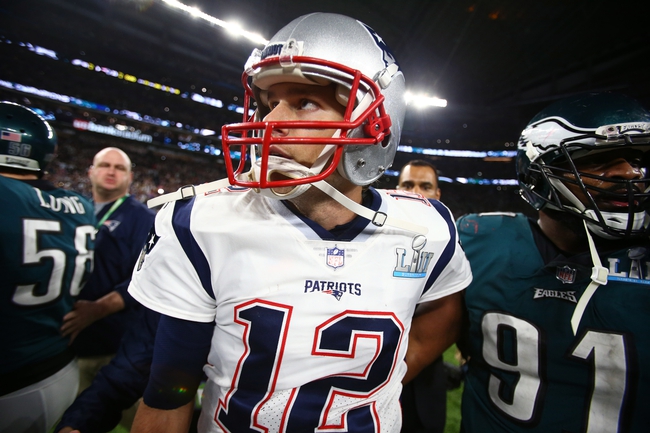 Online Sports Betting Odds for the NFL and the AFC East

The NFL Odds for 2018 are out and when it comes to winning the AFC East the Sports Betting community have a clear favorite.

While Online Sports Betting is never cut and dry, it is going to take some big events to unseat the odds maker’s favorite.  Of course, the NFL season is still months away and there will be plenty of NFL betting to come, let’s take a quick look at the NFL Betting Odds for the AFC East.

Buffalo Bills (+800) – The Bills have had a need at QB for quite some time so they have addressed that in a big way picking up A.J. McCarron and then drafting Josh Allen in the first round. LeSean McCoy is still one of the best running backs in the NFL and Kelvin Benjamin leads a cast of receivers along with tight end Charles Clay. Tremaine Edmunds comes in and solidifies an already tough defense and Jerry Hughes is still one of the top pass rushers in football. The Bills open with 3 of 4 games on the road and catch the Patriots at home in Buffalo on a Monday Night. If the Bills did find their answer at QB in the offseason they may be tough to pass on at this price.

Miami Dolphins (+1200) – The Dolphins haven’t been able to keep a QB healthy and Ryan Tannehill returns for a Miami team many were thinking would trade up in the first round of the NFL draft to grab a QB. Jarvis Landry is gone at WR for the Dolphins but running back Kenyan Drake began to emerge as a star last season. Ndamakung Suh is gone in the middle of Miami DL but they have plenty of 300+ pounders to help team up to fill some of that void and with Cameron Wake and last year’s number one Charles Harris they should be able to apply pressure. Most agree the Dolphins selection of Minkah Fitzpatrick in the draft is a can’t miss. The Dolphins schedule looks brutal playing 3 playoff teams in a row in December (Patriots, at Vikings, Jaguars) followed by a trip to icy Buffalo to close out the season may just be too much for them to overcome.

New England Patriots (-1000) – How dominant have the Patriots been in the AFC East? You have to bet $1000 just to win $100, that’s just a steep price to pay. New England does it their way and that’s with Tom Brady and this season it’s Julian Edelman who will miss the first 4 games of the season with a suspension. The drafting of Georgia RB Sonny Michel will only liven up the Pats running attack. Defensively it’s all about the system, the names seem to change but the results remain the same as does the strategy; deciding what to take away from the opponent and making them beat the patriots another way. It’s tough not to respect what the Patriots have done, but for me it’s tougher to lay these kinds of odds.

New York Jets (+1500) – The Jets fans didn’t seem happy with the selection of Sam Darnold in the NFL draft with the second overall pick but honestly, I thought it was a much better pick than taking Christian Hackenburg a few years back in any round. The Jets also picked up QB Teddy Bridgewater this offseason as well as RB Isaiah Crowell who could be the best rusher the Jets have had in a long time though they still seem weak at WR. Defensively Leonard Williams has emerged as a top defender in the NFL and Marcus Maye and Jamal Adams still have a ton of upside in the secondary. The jets close out the season with the Patriots and they hope it will be with a lot more at stake than just playing a spoiler.

Best Betting Odds: While the Patriots deserve to be big favorites, I don’t see any value in the odds so I am going to try and beat them and get a nice payday. I have little faith in the Jets with a rookie QB and some other big holes. Miami has been decent and last time Tannehill played the bulk of the season they went to the playoffs though he wasn’t around to take the field in that game; at 12 times our money it might be worth a small play. The Buffalo Bills look appealing at betting odds where we can get 8 times on our money. While I normally like to take one team and roll with it, the odds are so nice on the Dolphins and the Bills I will split my wager evenly among those two and hope for a few bounces to go my way. If either of these teams hit the NFL Odds are more than good enough to make this bet a big winner even after splitting the wager.

The pick in this article is the opinion of the writer, not a Sports Chat Place site consensus.
Previous Pick
NFL Odds: Betting Washington Redskins Derrius Guice To Win Offensive Rookie of the Year
Next Pick
NFL Odds: NFL Betting Odds for the NFC East for 2018