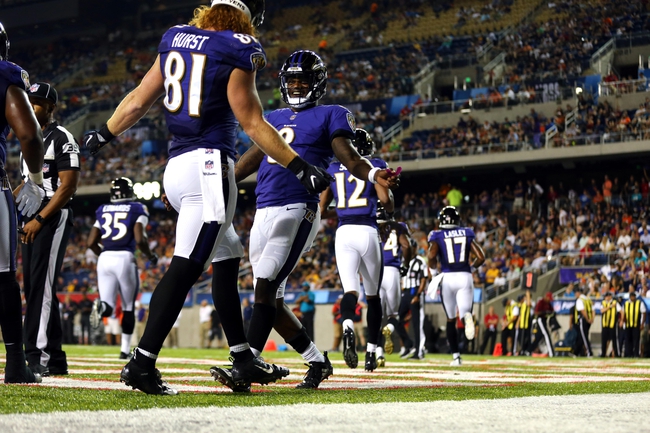 We have some week 1 NFL preseason action on Thursday as the Los Angeles Rams and the Baltimore Ravens kick off their respective preseason schedules.

The Los Angeles Rams will be looking to follow up an impressive 2017-18 campaign that saw the Rams make the postseason for the first time since 2004 in Sean McVay’s first year as head coach of the Rams. The Rams had the offensive player of the year in Todd Gurley, and the defensive player of the year in Aaron Donald to go along with starting QB Jared Goff. Goff lost the services of Sammy Watkins in the receiving corps, but some would argue that L.A. upgraded by acquiring Brandin Cooks from the Patriots for the 23rd overall pick in the draft. To give you an idea of the kind of threat that Cooks perceives, he is one of only four receivers in league history with three 1,000+ yard and 7 touchdowns seasons before the age of 25, joining Randy Moss and Odell Beckham Jr. as two of the others. The Rams acquired Marcus Peters and Aqib Talib via trade to bolster the Rams’ secondary while Ndamukong Sun was signed to add to the Rams already fearsome pass rush. Many are under the Super Bowl or bust mindset in the City of Angels, but it’s not unrealistic to think this could be the year that the Rams get there.

The Baltimore Ravens will be looking to bounce back from a frustrating 2017-18 season that saw the Ravens finish 9-7 and miss out on the postseason in the final game of the season after coming up short on 4th down and allowing Cincinnati to score in the dying seconds of the game. The loss kept Baltimore on the outside looking in for the third straight year and fourth in five seasons, leading to speculation that head coach John Harbaugh could’ve been fired and given the draft, where Baltimore selected Louisville dual-threat QB Lamar Jackson, led to more speculation that this could be Joe Flacco’s final season in charge of the Baltimore offense or even in a Ravens’ uniform altogether. The Ravens’ defense remains in tact for the most part after allowing just under 19 points a game and recorded a league-high 34 takeaways but one has to wonder if the axe will fall on Harbaugh if the offense can’t match the defense’s efforts and the team misses the playoffs once again.

Anyone who reads my stuff knows, that I’m all about depth when it comes to betting on the preseason. Position battles usually bring out the best in guys, and the team with more position battles emerges victorious more often than not. With that said, the Ravens already have a game under their belts to work out the kinks of the preseason opener, and while the Rams may have the better first string group, you have to wonder if there will be some rust when they finally take the field. Baltimore has serious depth at quarterback with Jackson and Robert Griffin III that can tear the backups apart and I think the Ravens will have a strong preseason, and as such I’m backing them to get the job done at home here.