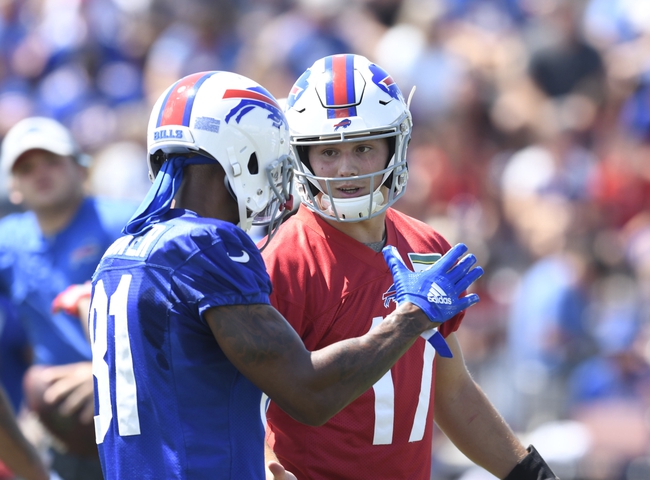 The Carolina Panthers are fresh off winning 11 games last season but continue having to prove that they should be taken seriously. Cam Newton still doesn’t get the respect of a top quarterback, but this game will obviously feature a lot of Garrett Gilbert and Taylor Heinicke at the position. Instead of seeing star running back Christian McCaffrey, C.J. Anderson and Cameron Artis-Payne will get the bulk of the touches. Rookie receiver D.J. Moore has been tearing it up in camp, so it should be fun to see him run a few routes in preseason action. Defensively, the Panthers have two potential rookie starters in linebacker Marquis Haynes and cornerback Donte Jackson, so those are the two players to watch immediately. There’s obvious playing time open at linebacker with the four-game suspension of Thomas Davis. The Carolina Panthers have the potential to be boom or bust, so seeing progression in preseason will be key.

The Buffalo Bills are the one team that enters the preseason with a true quarterback battle on its hands, as I wouldn’t be shocked if A.J. McCarron, Josh Allen or Nate Peterman are named the starter. These are the type of teams you should love betting wise, as open competitions usually create the most competitive and successful teams in exhibition play. The Bills are sure to throw the ball a lot and give each player a chance to prove themselves equally. Defensively, rookie linebacker Tremaine Edmunds has a chance to prove he deserves the starting job in the middle and Weber State cornerback Taron Johnson hopes to earn respect in what is already a talented, crowded secondary. The Buffalo Bills may be far away in terms of competing when the games matter, but this should be a fun, valuable team when it comes to preseason betting.

I focus on nothing more than quarterback depth in preseason play, and the Bills are a preseason betting dream for folks like me. All three of those guys have a shot at the starting job, so they'll not only throw the ball a lot, but every guy should be dialed in knowing they have a real shot to move up the depth chart. This isn't your typical backups doing just enough to keep a roster spot knowing they'll never actually see the field. Not to mention the Panthers have nothing behind Cam Newton, who may not even play this game. The Bills and the cheap chalk may be the best bet on the board for Thursday's loaded card.