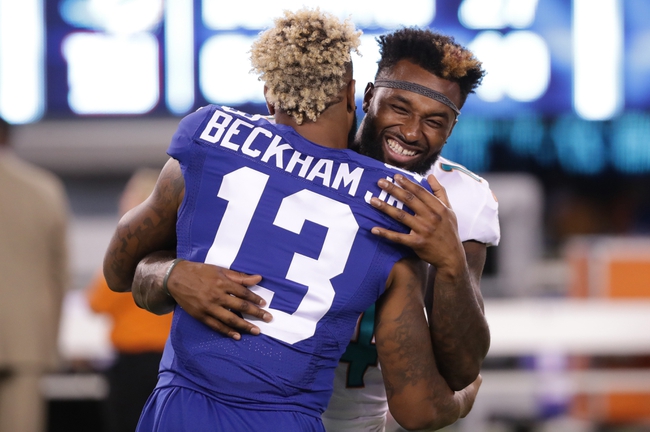 The Cleveland Browns are predicted by many to be one of the more improved teams in the league, as they’re under new management, have added some intriguing talent and have exciting youth to give this franchise a shot in the arm. Tyrod Taylor and Baker Mayfield will show what they have at quarterback, while rookie Nick Chubb has a chance to prove he deserves to be a key piece on this offense out of the gate. Oh, anytime you get a chance to watch Jarvis Landry is a bonus, as the guy is one of the more competitive players in this league. Defensively for the Browns, I’m keeping my eye on a revamped secondary that includes T.J. Carrie, Damarious Randall and Denzel Ward. Seeing how much Myles Garrett has improved since last year will also be a major key for the Browns success. The Cleveland Browns have some excitement surrounding their franchise for the first time in a while, and preseason or not, they need to build on that and show up in exhibition play.

The New York Giants are another team that some think can make a jump after last years failures. Obviously everybody and their mother wants to see running back Saquon Barkley, who is the clear frontrunner for NFL rookie of the year. Don’t expect Eli Manning or Odell Beckham Jr. to play much, if at all in this game, so expect to see a ton of Davis Webb and Kyle Lauletta at the quarterback position. The Giants also need to improve their offensive line and maybe rookie left guard Will Hernandez can be a difference maker. Defensively, you want to see how rookie defensive end B.J. Hill handles a possible starting position and if linebacker Lorenzo Carter can continue to build on a solid camp and earn reps his first season. The New York Giants have a lot of key pieces in place, it’s all about staying healthy, as last year they were bit badly by the injury bug.

I'm a big fan of quarterback depth in preseason, but I'm also high on young teams that have a lot of comp at many positions and will bring that fire to meaningless games. The Cleveland Browns have a lot to prove this time of year and will want to make a statement early. The Browns want to prove they're not the same old Browns, and while many don't give a damn about preseason, success here can go a long way to building positive vibes for when the games matter. Also, I'm not trying to have money tied up in a game Webb and Lauletta will see most of the reps. So, give me the Browns in this toss-up.